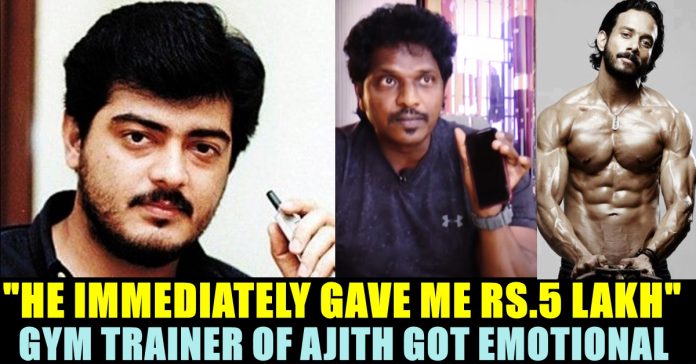 An one year old video of a celebrity gym trainer named as Siva kumar, sharing his experience while training actor Ajith kumar during Aarambam times, is doing rounds in social media platforms now. In the interaction with a youtube channel, Sivakumar shared about his experience in Tamil film industry as a celebrity gym trainer. He who trained actor Bharath for 555 movie to gain six packs, also worked with Arjun, Ajith, Arun Vijay in their fitness and bodybuilding. In this particular interaction, he can be seen talking about how Ajith worked hard to gain fitness for Vivegam , despite of the pain he had due to several operations in his body. He also shared how Ajith treated him as a blood brother.

Being one of the leading actors of Kollywood, actor Ajithkumar enjoys a huge fan base in Tamilnadu. Despite of getting a humongous amount of love from his fans, Ajith refused to have fan clubs and dismantled it few years ago as he wants his fans to look after their families. This only increased the love of fans for him as they started admiring him more for his attributes. Not only common cinema audience, even people from his own industry are admiring him for his works and personal characters. Actors like Simbu, Anirudh, Nazriya are few of the many actors who expressed their admiration towards Ajith Kumar.

When he was required to gain a physique for one of his upcoming film, Ajithkumar who saw actor Bharath’s picture from 555 movie in a website, called Sivakumar and asked him if it is possible to gain a body like Bharath’s. Since then Siva collaborated with Ajith and worked on his physique. Siva says that Ajith is a hard worker who completes his tasks such as hangings no matter what.

“You won’t believe me, he did hangings with his injured back. A well-built man would fail to do it successfully. What I learnt from him is his unbelievable confidence level. If his body co-operates, he can achieve a lot more in body building but there are several injuries in his back” said Siva who went on to add about how Ajith helped him personally.

“I bought a single bedroom flat recently by pawning the jewels of my mother. After completing the registrations and formalities, I gave the bond to him. After receiving the bond, the first thing he said was that he too bought a flat initially. He said that I will become a huge personality in future. I saw the happiness in his eyes while saying it. He loves when people getting success on their own. Immediately, he gave a cheque that worth Rs.5,10,000, considering the DDX tax to get the jewels of my mother back.” Siva said.

“Siva, you called me as a brother. I want my contribution in your home. Get the jewels of your mother back.” said Ajithkumar to Siva while giving him the huge amount. “This is not your salary. This is my contribution to your house” the “Mankatha” actor said, according to Siva.

On the work front, Ajith kumar is expected to appear in Valimai, shooting of which is postponed due to COVID 19 lockdown. Comment your views on this revelation of Siva !!

Previous articleDirector Hari Regrets For Glorifying Police In His Films !!
Next articleLeaked Audio Of Police Officer Who Made Insensitive Comment On Facebook !!

Fans of team Chennai Super Kings and Cinema/Sports celebrities who also look up to the Dhoni-led team has been celebrating ever since it became...

Indian Captain Virat Kohli came up with an emotional tweet after losing the final match against New Zealand in the World Test Championship. The...