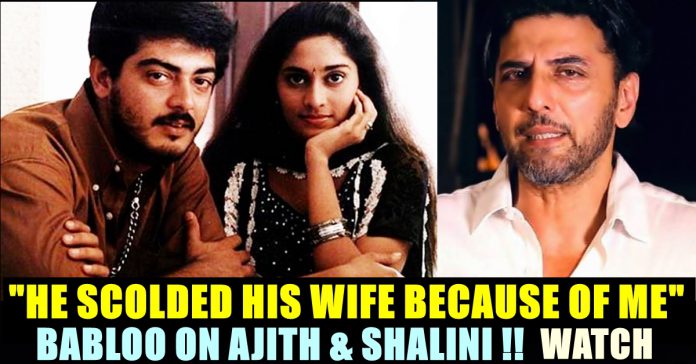 Actor Prithiveeraj who is popularly known as “Babloo”, shared about an unknown incident that took place between himself and former actress and actor Ajith kumar’s wife Shalini before lockdown, in a recent interaction. He shared screen space with actor Ajith kumar in “Aval varuvaala” film which is one of a biggest breaks in the acting career of the “Mankatha” actor. “Babloo” played a role of an antagonist in the film and had combination scenes with Ajith kumar. Later, Babloo appeared in many other films and serials but became popular once he confronted actor Simbu in a reality dance show named as “Jodi No. 1”. In the show, Babloo and Simbu had a brief argument which led the “Manmadhan” actor to walk off the show. After that Babloo’s role in Gautham vasudev menon’s Vaaranam Aayiram made an impact among fans and his role as a transgender in “Arasi” gained a separate fan base among family audience.

While talking about actor Ajith Kumar in this recent interaction, Babloo said that Ajith kumar is the only gentleman in the film industry. “I have told many things about him in all these years. He studied with my sister and protected her like a bodyguard at that time. He gave her his personal contact number and would still inquire me about her howabouts whenever he meets me in public places” said Babloo in the interaction who went on to share an incident that took place most recently.

“Before this lockdown, I went to a restaurant to eat. I saw Shalini with her daughter there. I hesitated to talk with her as haven’t acted with her in any film and refused approaching her. This happened two times and the third time, that restaurant authority called me and said that Shalini is asking for my contact number. When I asked him to give her my number, the next minute i received call from her.” said Babloo who went on to narrate what Shalini told him. “She asked me apology for not talking with me.” Babloo added.

“Sorry sir, we haven’t worked together. I didn’t want to be a disturbance, so avoided talking with you. When I told this to Ajith, he got a bit angry with me. He scolded me for not talking with you and said that you are his senior actor and his friend from school days” said Shalini to Babloo according to his interview. “This shows his upbringing and his class. A perfect gentleman” Babloo said. 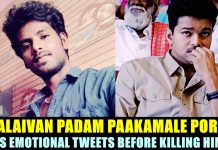 Dhiwaharan Palani - August 14, 2020
0
An ardent fan of actor Vijay, named as Bala, killed himself due to unknown reasons and his final tweets are trending in...

Dhiwaharan Palani - August 13, 2020
0
Amidst the tension that is constantly taking place between India and Pakistan due to various reasons, a Pakistan based vlogger named as...