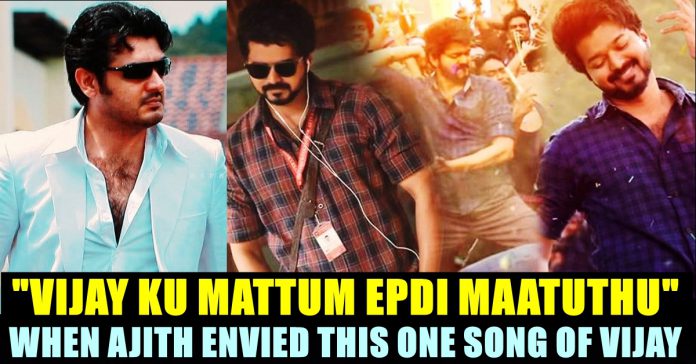 Singer and radio jockey Suchithra opened on how Ajith envied the hit songs of Vijay in her recent video interaction with Cinema Vikatan. Ajith kumar who is considered as a rival of actor Vijay since mid 2000s, has a strong friendship with the “Gilli” actor since early 90s. They both acted together in a movie named as “Rajavin Parvayile” and their friendship became evident in certain occasions. Recently, in “Master” audio launch, Vijay said that he got inspired from his friend Ajith and wore suit for the first time for an event purpose.

Now, Suchithra who sung many blockbuster songs in Tamil film industry has revealed how Ajith expressed his thoughts on Vijay getting super hit songs for his movies. When the host of the interaction asked Suchi to share about which celebrity liked her singing very much, Suchi said that Ajith is the only actor who lauded her singing skill to her.

“Oru Chinna Thamarai” is a song from 2009 film Vettaikaaran in which Vijay romanced actress Anushka. The film’s music was composed by Vijay Antony and the melody number is a favourite one for many people till date.

“Thalapathy” Vijay and “Thala” Ajith are two of the most talented actors in the cinema industry of Tamilnadu. The rivalry between both the actors is less as far as the rivalry between their fans is considered. Its been a long time since actor Ajithkumar and Vijay declared as official rivals.

Both the actors are being praised for their respective skills and has separate fan base as we all know. Ajith who is known for his screen presence, impressed his fans with his offscreen personality. Meanwhile Actor Vijay is known for his exceptional dancing skill and for his special ability of attracting kids effortlessly.

Now, as a result of this countrywide lockdown, movies of both the actors got postponed. Vijay’s “Master” is expected to release on Diwali festival whereas Ajith’s “Valimai” is eyeing for a Pongal release. Comment your views on this revelation of Suchi !!