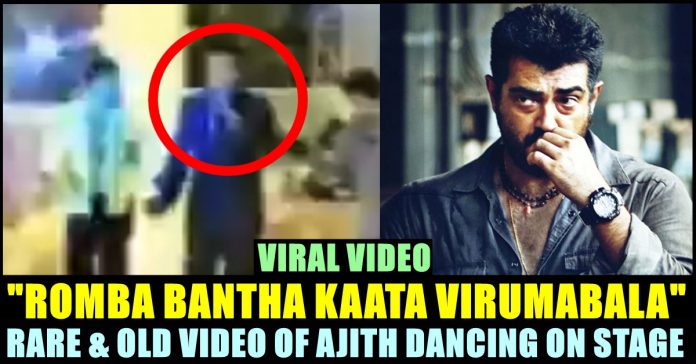 An oldest video of actor Ajith Kumar shaking his leg on stage is trending in social media platforms now. Being one of the leading actors of Kollywood, actor Ajithkumar enjoys a huge fan base in Tamilnadu. Despite of getting a humongous amount of love from his fans, Ajith refused to have fan clubs and dismantled it few years ago as he wants his fans to look after their families. This only increased the love of fans for him as they started admiring him more for his attributes.

Ajith also avoided appearing in public events and in the promotional interviews of his own movies. Unlike other top actors, Ajith is not involving in any political issues. The way he spoke in front of former chief minister Kalaignar Karunanidhi in an event about being compelled to attend functions is one of the best example for us to realize that Ajithkumar is a man who always talks his heart out. Not only common cinema audience, even people from his own industry are admiring him for his works and personal characters. Actors like Simbu, Anirudh, Nazriya are few of the many actors who expressed their admiration towards Ajith Kumar.

Now, rare and old video of Ajith kumar interacting with his fans from a stage is going viral in the micro blogging social media site. In the video Ajith also can be seen providing a glimpse of his dancing skill. “Usually I don’t participate in public functions. You all might think why I came here. Its very simple. I came here to express my gratitude to the technicians such as dancers, fighters, lightmen. To tell the truth, these technicians are taking good care of actors like us when we go for shooting in a sensitive place. So I really wanted to express my gratitude. I am really glad that I am here. I wish them well.” Ajith kumar can be seen reasoning his arrival in the video.

During midway of his speech, upon fans request and due to the compulsion of the dancers, Ajithkumar who denies to give his presence in public, danced few steps along with the dancers. The old video is trending now with lovable captions from the fans of the actor.

That Final dance step for audience🧡#தலசாம்ராஜ்யம்

Comment your views on this rarest video of Ajith !!

Hashtag “Aditi Jokes” Is Trending In Internet !! You Just Can’t Miss Them

Mindless jokes which were trending as mainstream jokes in weekly magazines and news papers a decade ago, are trending in the micro blogging social...

Sharing the trailer of actress Samantha's upcoming film "Yashodha", actor Vijay Devarakonda who is going to share screen space with the actress in one...