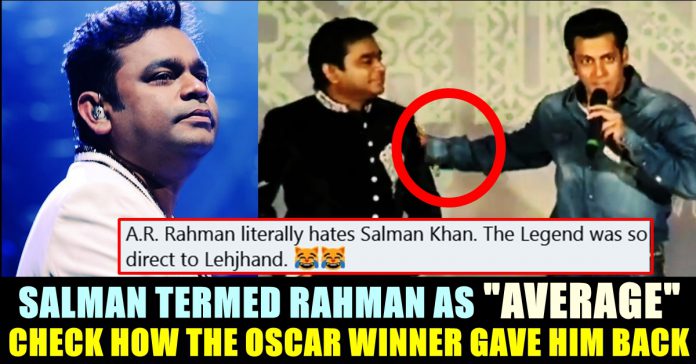 Known for his humbleness, A.R Rahman always stayed away from controversies in his cinema career which spans more than 28 years. However, one of an old video of himself with Bollywood Superstar Salman Khan has grabbed a space in the micro blogging social media site now. The incident which was happened in the year 2014, Salman Khan and A.R Rahman shared a stage together with the presence of Director Kabir Khan and Political figure lawyer Kapil Sibal.

Being the only Indian musician to win the academy award, A.R Rahman is known for his cool and composed attitude. His calm attitude even after winning Oscar twice, is world famous. He is one of the most loved musician in the world and the people of Tamilnadu are very proud on the fact that he works predominantly in Kollywood industry. Having composed for Atlee-Vijay’s “Bigil” recently, the composer lauded by the fans for the songs and Background score in the film.

Now, in this old video, Salman Khan openly called A.R Rahman as an “Average music composer” and make Rahman to accept it by staring at his face on stage. With a little smile in his face, Rahman could be seen shaking his head “Yes” and would refuse shaking hands with the actor in a subtle way. This incident didn’t go well with the fans of the composer as the “Dabbang” actor received online flak at that time.

In the same event, when one of a reported asked Rahman when will he work with Salman Khan, Rahman, without a second thought, would reply “then he has to do movies which I like” in a way of giving back to Salman for the way he behaved earlier.

A twitter user named as “Sand-d-singh” shared the video with a caption saying “Legend stayed away from the virus even before Corona.”, followed by which many people stared reaction to it and shared the same. Now, the tweet blew up and Salman who is already under scanner for Nepotism accusation, getting slammed by the netizens for his rude behaviour.

Legend stayed away from the virus even before Corona. pic.twitter.com/SRMV1jfjsO

REPORTER : When will you do music for a Salman Khan film?

A.R. RAHMAN : I’ll do for him when he starts to do the films I like (in this case he’s talking about ‘good’ films)

Well, that was a burn. 🤭 pic.twitter.com/XWna4GBgOZ

People who are launched by salman were all insiders.

He has removed Arijit Song from Sultan
He ha removed Sonu Nigam song from Kick
He has thrown Aishwarya out of chalte chalte.
Insulted A R Rahman in public.

Recently, after the demise of Sushant Singh, the musician wrote “What a way to go Sushant …Rest in peace in a better place” in his twitter account. Many of his followers believed that the tweet was posted to convey that Bollywood is not a better place.

Comment your views on the way Rahman handled Salman !!

On 20th of August, entire film fraternity prayed for the recovery of the legendary playback singer SP Balasubramaniam who got infected with the COVID...

While many people are expressing their shock over Sanam shetty's unexpected eviction, Meera Mitun, former Bigg Boss contestant has posted a tweet trolling the...