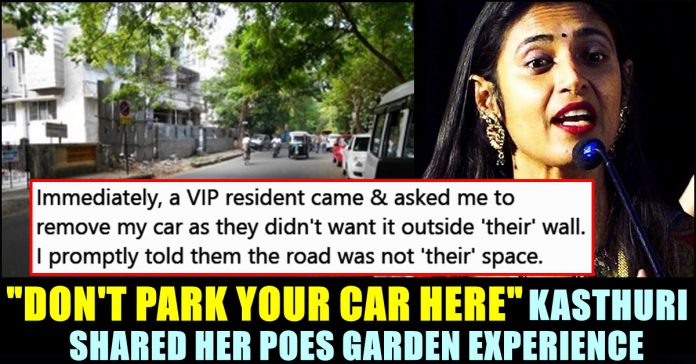 Not many days ago, a report on Boat club residents welfare association submitting a formal letter to Chennai police officials demanding restriction in their area surfaced. On seeing about this news, actress Kasthuri who is known for her appearance in Tamil cinema, has shared one of her experience in Poes garden, another area in Chennai similar to Boat club where the houses of most influential personalities including Rajinikanth and former chief minister Jayalalitha is located.

Ravi Appaswamy, president of the Boat club welfare association submitted a letter to Chennai city police commissioner AK Viswanathan on 27th of May. The letter requested for drop gates to be installed at the entrance of upscale locality. The letter complained about the non-residents who are using the Boat club area for walking and jogging and that unknown cars are parked during odd timings.

Here’s the letter they produced :

It is notable that the homes of some of the most influential personalities such as BCCI former president and industrialist N Srinivasan, TVS group chairman Venu Srinivasan, SUN TV executive Kalanithi Maaran, Lok Sabha MP Dhayanidhi Maaran, Shyam Kotheri and top management officials of TTK, Murugappa and MRF groups are located in Boat club. However, Chennai corporation commissioner G Prakash denied the request made by the residents of Boat Club area. While interacting with television channel Times now, he said that no such special treatment will be given to the residents as the law has no provision for such a demand.

As soon as this proposal of Boat club residents came to light, it instigated several reactions in social media where people expressed their anger on Boat club residents demanding special treatment for them. Actress Kasthuri who is known across social media for her bold opinions to political and social issues, said how she got treated when she parked her car in POes garden.

Through her tweets, Kasthuri said that the incident took place several years ago. When she parked her car in a legal spot near a hospital in Poes garden as she wanted to go, a VIP resident approached her and asked her to remove her car they didn’t want parked in front of their wall.The actress who denied to remove her car, says that she replied to them by saying that road is not their “space”.

Within hours a “No Parking” board was planted in the place, the actress says. “Several years ago, I parked my car in a legal spot near a hospital in Poes garden that I had to go to. Immediately, a VIP resident came & asked me to remove my car as they didn’t want it outside ‘their’ wall. I promptly told them the road was not ‘their’ space. Within an hour, a ‘no parking’ sign was planted there! When you have friends in the right places and deep pockets, anything is possible in TN. Nearby is a ‘radiant’ VIP’s palace .They successfully cordoned off an entire road as no parking zone. Became a huge issue.” tweets of Kasthuri read.

2/2 Within an hour, a ‘no parking’ sign was planted there!

When you have friends in the right places and deep pockets, anything is possible in TN.

Nearby is a ‘radiant’ VIP’s palace .They successfully cordoned off an entire road as no parking zone. Became a huge issue.

The Bigg Boss participant posted these tweets as a response to the news on the letter produced by Boat club residents. Comment your views on this incident shared by Kasthuri !!

Previous articlePatient Tied To Bed In Hospital Due To Non-Payment ??
Next articlePopular Actor Couldn’t Get Hospital Bed !! Emotional Video Out

Indian playback singer, Chinmayi Sripada Twitted about the body-shaming video of Deepa Shankar on the 2nd September of 2021. The Cook With Comali fame...