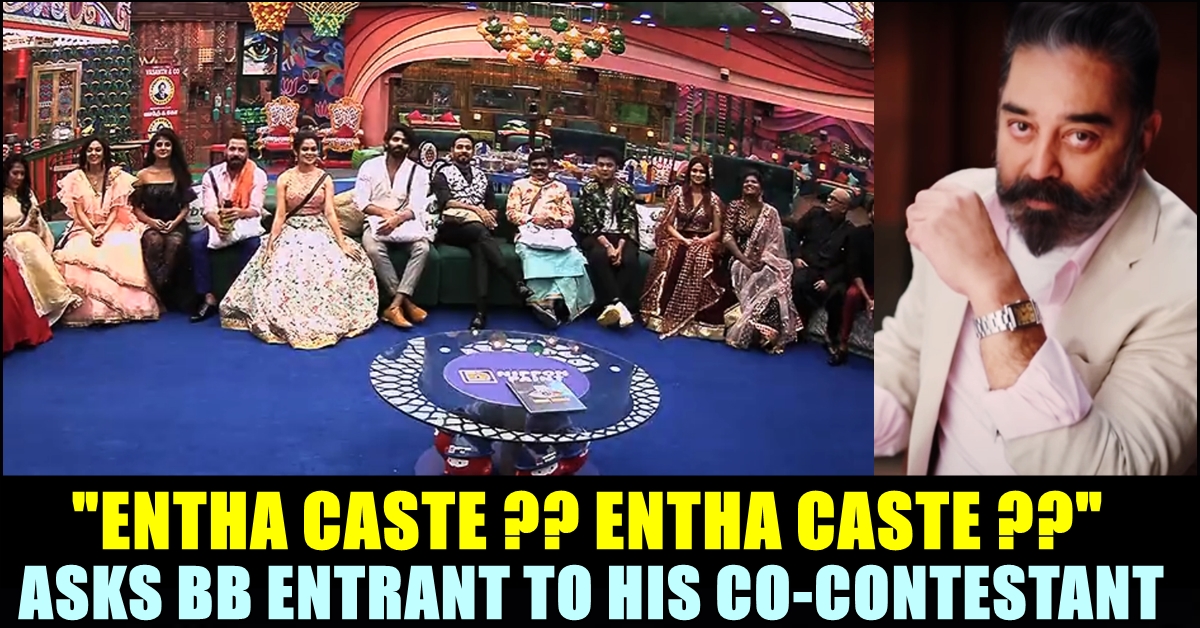 Despite of several movements and protests against the existence of caste discrimination in India, certain people are still obsessed with it and are not feeling ashamed of exposing it in front of others. The obsession went too far that an individual who participated in the Kamal Haasan hosting BIGG BOSS show directly asked his co-contestant which caste he is before giving him a hand shake. People who noticed his urge of knowing about other people’s caste identity, are slamming him left and right for being a separatist.

On seeing the contestants list, fans started reacting in various ways. Army pages for the female contestants have started emerging in social media platforms. Many of the contestants were either personally or officially related to Kamal Haasan. Actor Aari said that Kamal inaugurated his trust whereas model Balaji Murugadoss said that he met Kamal Haasan personally in his office after achieving in body building. Actress Gabriella said that she acted as a younger sister of Sruthi Haasan, daughter of Kamal Haasan.

While welcoming a contestant named as Suresh Chakravarty, Kamal Haasan introduced him as saying that he is a multi faceted personality. “Apart from his talents, he is very well known to me. I know him for a very long time. I like the path he chose to gain success.” said Kamal Haasan while welcoming him.

While interacting with Kamal, Suresh said that he feels like he achieved everything after sharing the stage with Kamal Haasan. “Please send the prize money to my house with that plant pot, I will be leaving to my home” he cheekily said to Kamal Haasan.

Followed by that, Suresh Chakravarty thanked Kamal Haasan and entered the Bigg Boss house with his plant. The first person welcomed him into the house was Balaji Murugadoss, a model by profession. As soon as meeting Balaji, Suresh who greeted him can be heard asking “Entha caste ?? Entha caste ??” to him.

Balaji, with a strange look in his face, would reply “Nair” while shaking his hand. This incident happens in the first episode right after Suresh making his entrance into the house which is still available in hotstar.

Suresh asking Balaji which caste he is . .

An earlier tweet Suresh posted in the year 2017 is doing rounds in the micro blogging social media site. In the tweet Suresh wants S.Ve Shekar to replace Cho. Ramaswamy. Reactions for the tweet are pouring now as Suresh gained attention by participating in Bigg Boss show.

Suresh Chakravarty made his acting debut in the year 1991 in K Balachander’s “Azhagan” featuring Mammootty, Babu priya and Geetha in pivotal roles. In the film, Suresh played a role named as Agarabannu sokku. Before entering the Bigg Boss house, Suresh was busy making cookery videos for his youtube channel. Through his Instagram account, Suresh called himself as an Actor, Anchor, Writer, Director, YouTuber.

Ashwin’s Final Warning To The Batsmen Of All The Teams !!
Bala’s Varmaa Released On OTT !! You Just Can’t Miss These Reactions