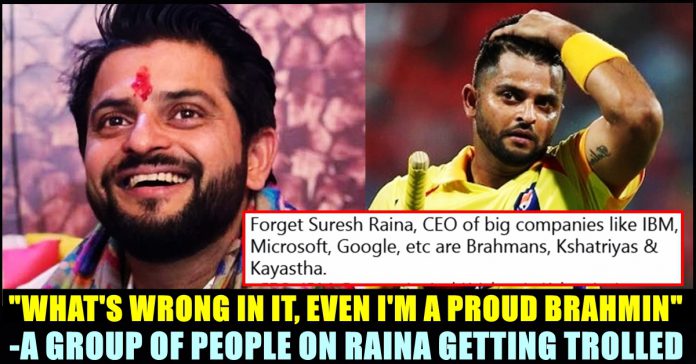 Ever since the video of Suresh Raina linked Chennai’s culture with “Brahmins” by saying that he himself is a Brahmin, majority number of cricket fans started expressing their displeasure over the cricketer by making memes and trolls against him. Now, a set of people emerged defending the left hander’s statement and condemned people who are trolling Raina for revealing that he is a Brahmin himself. They questioned asking what’s wrong in the statement of the cricketer and many could be seen identifying themselves as a “proud” Brahmins.

Couple of days ago, a statement made by Suresh Raina, one of the most loved batting all rounders of team Chennai Super Kings, irked a number of online fans. The cricketer who is playing for the Chennai based team since the inaugural season of IPL tournament, linked Chennai with Brahmins when he was asked to tell about how he is embracing the culture of Chennai city. His opinion irked a number of fans who believe that Chennai is known for its diversity and expressed their disappointment over the ignorance of Raina who is playing for the city for more than 10 long years.

In a recent interaction with media, Raina was asked to comment on how he embraces the culture of Chennai. “We have seen you in Veshti, We have seen you dance and all and have seen you whistle, how have you embraced the Chennai culture ?” asked the anchor to Raina. Replying to him, Raina started with “I think I am also Brahmin. I have been playing since 2004 in Chennai. I love my teammates”. The way he linked the entire city with Brahmin community shocked a number of social media users as they believe that Chennai is a place that belongs to the people of all communities.

On seeing the cricketer being attacked for the statement he made, a group of people came in to defend him. “I support Suresh Raina. What’s wrong in it to say I come from a Brahmin family. If someone can take advantage for lives on reservation , what’s wrong in saying I m a Brahmin” read a tweet of a user whereas another one said “

#मैं_भी_ब्राह्मण
I support Suresh Raina.
What's wrong in it to say I come from a Brahmin family.
If someone can take advantage for lives on reservation , what's wrong in saying I m a Brahmin pic.twitter.com/1xUEXh9UsE

Everyone whether he/she is an OBC or SC/ST or Tamil must be proud of what they are.
That is what Suresh Raina doing and I don't think it's hurt to emotions of any caste and religion.
Be proud of what we are.
I firmly stand with Raina.
I am proud of being brahmin#मैं_भी_ब्राह्मण pic.twitter.com/4wLBS7AoGO

They should feel ashamed who take advantage of reservation in the name of caste or religion.

All Proud Brahmin, Rajput, Kayastha, etc., are sitting on the heights of success with their hard work whether it is Suresh Raina or Google's CEO Sundar Pichai🚩🦁🇮🇳✌️#मैं_भी_ब्राह्मण pic.twitter.com/QTxc1CoMH5

When some beggars goes to take a job and beg, they tear his chest and say that I am a Dalit, dalit, then it is not casteism and here suresh raina is proud of being a Brahmin, what is the casteism in this? Now why are some people jealous in the backyard?#मैं_भी_ब्राह्मण
I proud.

Why Suresh Raina is being trolled for calling himself a Brahmin?

#मैं_भी_ब्राह्मण
I am a proud Indian that is my identity
But yes I am a brahmin and I am proud of myself
Why only brahmins can't openly say that they are brahmins?
Full support to Suresh Raina
I am a proud brahmin and I will say it loud and clear
Ukhaad lo jo ukhadna hai🇮🇳

Only an illiterate and idiot will have a problem with what suresh raina has said.
These Illiterate communists, leftists and fake ambedkarite won't have read the constitution once in their life.

I m vaishya and I m proud of my hindu dharma.#मैं_भी_ब्राह्मण

Who are these netizens who dare to slam suresh raina . Fuck them 🖕🖕#मैं_भी_ब्राह्मण pic.twitter.com/QOgHeUqvPT

Despite of several movements and protests against the existence of caste discrimination in India, we could still see people boasting about their caste in front of others. They who think that speaking high of their caste gives them the pride, often try to impose it on others as well. It is high time for them to realize that the pride comes with what we do in our life and not from our birth.

Previous articleFollower Wanted To Know The Breed Of Siddharth’s Dog !! Actor Won Hearts With His Reply
Next article“Who Is Balakrishna ?” Is Trending In Internet After The Statement He Made Against A.R Rahman !!