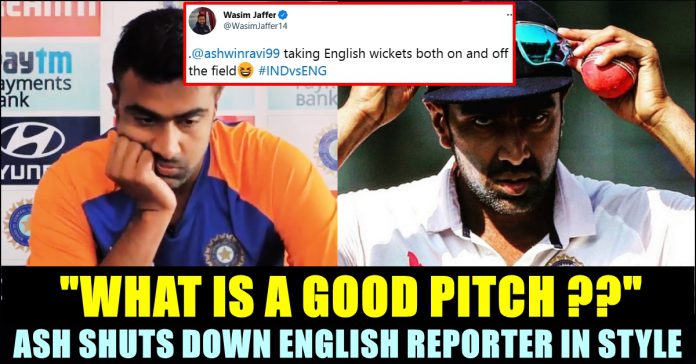 After taking the wickets of English batsmen on field, Ravichandran Ashwin also clean bowled a English reporter and the video is trending in the social media platforms with reactions praising the cricketer for his sensible way of handling one of the most controversial questions regarding the third test match that took place between India and England. After India winning the game within two full days against England, many started criticizing the pitch by saying that it’s not the one to play a test match.

Ashwin became the second fastest bowler to pick up 400 test wickets with having legendary Sri lankan spinner Muttaiah Muralitharan ahead of him. The Chennai based cricketer took 77 test matches to achieve the feat whereas the Tamil speaking Sri lankan cricketer picked up his 400th wicket in his 72nd match. Entire Internet, along with experts and celebrities from several other industries lauded the cricketer for this achievement.

As soon as the match ended, many including former cricketers Michael Vaughan, Yuvan Singh came up with tweets criticizing the pitch and said that the track helps spinners adding that it would harm test match culture. Ashwin, after finishing the game, came up with a tweet explaining how idea is being sold to people.

Now, to a English reporter who asked “Was it a good pitch and can we expect a similar surface for the next match ?”,Ravi Ashwin lost his cool and immediately asked him to tell “what is a good pitch ??” and demanded the reporter to tell who defines a good pitch.

“The bowler was in the game and the batsman needs to bat well to get runs. There is absolutely no question about it. What makes a good surface and who defines it ?” Ashwin further asked. “Seem on the first day, then bat well and spin on the last two days ?? Come on. Who makes all these rules. We need to get over it.” Ashwin said and added that no England player complained about the pitch as they wanted to play a competitive game.

When the reporter asked whether Ashwin is hoping for similar surface, Ashwin replied saying “It depends on what you are hoping for. We are hoping for a good cricket match” and made the reporter speechless. Regarding the tweet of Yuvraj, Ashwin said that he didn’t see anything wrong in it and made it clear that he has an immense respect towards him.

"Did not find #Yuvraj's tweet wrong, have utmost respect for him"

Watch: Indian all-rounder #Ashwin responds to questions around his tweets, the #Motera pitch and more#INDvENG pic.twitter.com/ozSv2xuJOy

On seeing the video, Former Indian opener Wasim Jaffer came up with a tweet writing “Ashwin taking English wickets both on and off the field”

Comment your views on these sensible answers provided by the Chennai based cricketer !!