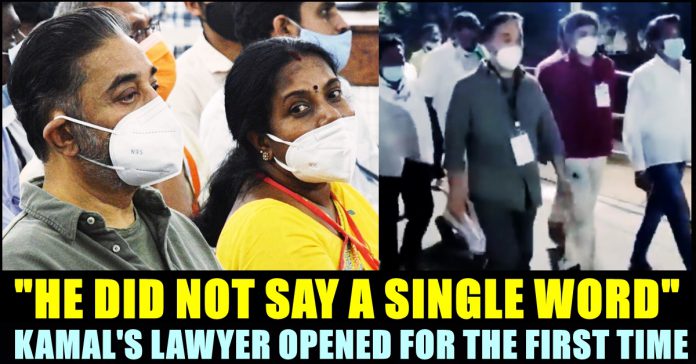 Lawyer and Political strategist of Kamal Haasan, SB Arjun opened for the first time about what really happened in the counting hall on 2nd of May. He revealed about Kamal Haasan’s first reaction after losing to Vanathi Srinivasan of BJP party by a tiny margin. Arjun believes that the stack of money and freebies provided by the opposition party caused the defeat of Makkal Needhi Maiam at Coimbatore South. He went on to add that Kamal didn’t say a word after losing but only smiled at him.

In an unexpected turn of events, ace actor and founder of “Makkal Needhi Maiam” party Kamal Haasan was defeated in the constituency he contested. It was BJP’s Vanathi Srinivasan who garnered 1500 votes more than him at the end of counting of the votes polled in the recently held Tamil nadu assembly election. Kamal was in leading till 6 PM on the counting day and the result was announced as Vanathi as the winner at 9 PM.

Party Makkal Needhi Maiam was founded on February 2018 by the veteran actor, vowing to veer the state away from the ways of the two key mainstream outfits. Kamal Haasan was expected to win the election with a large margin and his defeat came in as a shock to his fans, followers and supporters. During the end of counting, many people including celebrities expressed their wish of Kamal Haasan winning the election in social media.

Now, SB Arjun who spent ample time with Kamal Haasan throughout the Tamil nadu assembly election as a lawyer and political strategist shared details on what happened in the counting hall on 2nd of May which is when the vote counting took place. “It has been a surreal journey working with one of the biggest legends and brightest minds of our country. Every interaction with him is an overwhelming treasure trove of knowledge, but the most inspiring fact why I got drawn to him as a Leader is his perseverance and passion to make a difference to the society and his dream of ‘Reimagining Tamizh Nadu’. Alas, like some of his masterpiece movies, his political vision too was far ahead of its time.” Arjun shared about his experience through one of his recent Instagram posts.

Further, Arjun said that he truly believed that MNM will cross the winning ropes after seeing the result of 21 round and added that he felt proud on gaining that much votes without giving a single rupee to the voters. “However, the stacks of money and freebies tokens which was distributed by the opposition parties caught up with us.” Arjun wrote in his post.

“As his Chief Agent, it was my duty to tell him that we were trailing and that broke me more than the abuses and death threats that were shouted at me by the BJP cadres in the counting hall, hooliganism and rowdyism at its best. After the last round, I couldn’t hold back my tears, not for having lost the election by a mere 1000 votes, but for the fact that this state missed out on a great leader who would have represented her instead of corrupt rowdies.” he added in his post and went on to explain how Kamal reacted when he was informed about the loss.

“Even after the results were declared, he did not say a single word and just smiled at me. Those eyes told a million stories, the loudest one was the disappointment of not being able to serve the people where he was determined to bring a change and his dream to Reimagine Tamizh Nadu would have to wait.” Arjun wrote in his post.

After seeing the support for Kamal Haasan in social media, Arjun believed that the war for change has just begun and thanked people who showered Love on Kamal Haasan.

"Lungi Dance" is an Indian song composed and sung by Indian rapper Yo Yo Honey Singh for the soundtrack of the 2013 Bollywood film...

These 14 Late Night Restaurants In Chennai That Deliver To Your Place..

With late night parties especially on saturday's being a very popular option in Chennai these days, midnight hunger pangs are on the rise. Sometimes...

A video of Bigg Boss contestant Vikraman opening the wash basin tap and wasting the water for a long time by not closing it,...