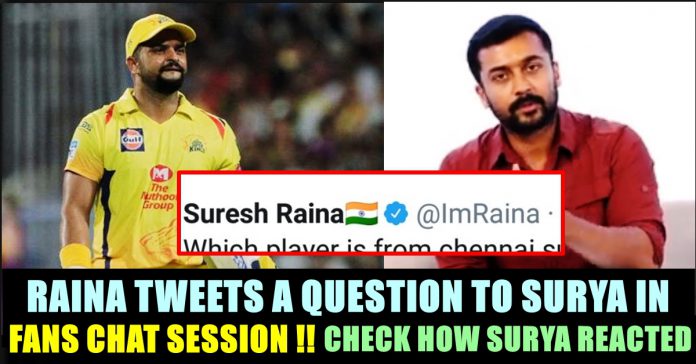 Actor Suriya who is currently awaiting the release of NGK on May 31 has conducted a chat session with his fans in twitter. The actor has Kaappaan, Soorarai Pottru and an untitled film with director Siva, in various stages of production.

While interacting with fans, to everyone’s surprise, Cricketer and Chennai Super Kings star player Suresh Raina came out of nowhere and posted his question to the NGK actor. He asked Surya which player from CSK he likes the most.

Raina in his tweet wrote “Which player is from chennai super kings is yours favourite and why ?? 😋”

For this, Suriya instantly thanked Raina for taking his precious time to ask a question. Suriya further added that his most favourite player in Chennai Team in none other than Dhoni.

“I always call him ‘maapley’,” he said, “So sweet of you to take time out and ask me a question. I still remember the first time we met. You came and said hello to me, though I missed you, the photo we have taken together is something that is memorable. I am sure you will agree with me too – Dhoni is my favourite cricketer from the Chennai Super Kings. I am a CSK fan for life,” he said.

Here’s the video of the actor’s response :

For the uninitiated, NGK is a political drama, which has Suriya as an upcoming politician Nandha Gopalan Kumaran. Selvaraghavan, who once made a similar film called Pudhupettai, has directed the upcoming venture. Sai Pallavi is paired opposite Suriya in NGK, which also stars Rakul Preet Singh.

Selvaraghavan has been missing from action since Irandam Ulagam. The director finished his film with SJ Suryah called Nenjam Marappathillai, but the horror film is still lying in the cans. NGK will be a determinant of the director’s future prospects in the industry. 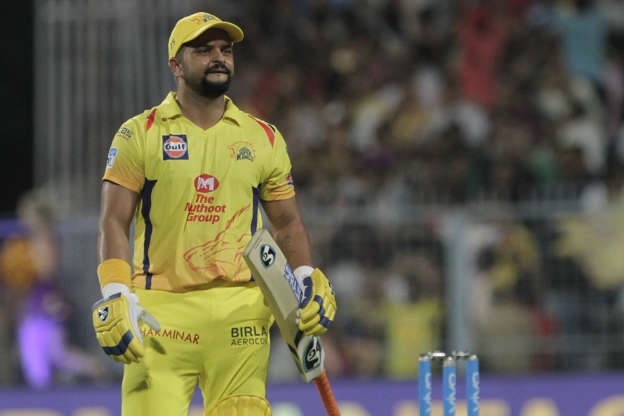 Yuvan Shankar Raja, a favourite of Selvaraghavan, has joined hands again with the director. The two had a fallout during Aayirathil Oruvan film and stopped collaborating for a while. NGK will bring back one of the popular director-composer combos of the Tamil audience.

Meanwhile Raina had an ordinary IPL tournament but however he managed to surpass 400 runs as in every season of IPL. The cricketer recently celebrated his daughter Garcia’s birthday.

Previous articlePriya Bhavani Shankar Brutally Trolled This Fake Profile For Being So Responsible !!
Next articleInsta User Asked Chinmayi To Send Nudes !! She Gave Him An Unforgettable Reply !!

The first one day International match between India and Australia inaugurated in Sydney Cricket Ground. Australia who won the toss decided to bat first....