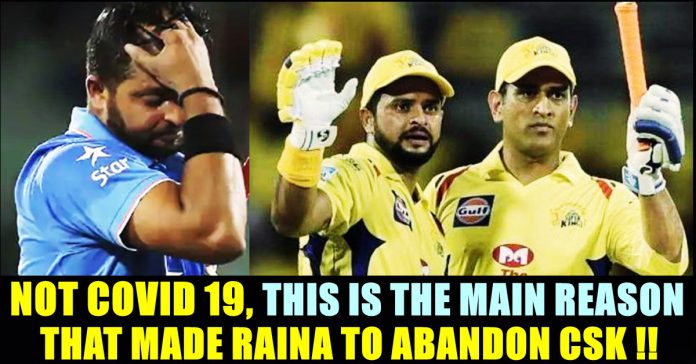 While people speculated that Suresh Raina returned to India due to the COVID 19 fear, the real reason behind the cricketer’s decision has been revealed. News on Suresh Raina returning to India due to personal reasons left fans of the team extremely dejected. The official twitter account of team Chennai Super Kings wrote “Suresh Raina has returned to India for personal reasons and will be unavailable for the remainder of the IPL season. Chennai Super Kings offers complete support to Suresh and his family during this time. KS Viswanathan, CEO” to let the fans to know about the update.

The news surfaced after a report on 13 members of the CSK team tested positive for COVID 19 virus in Dubai. The infected persons are understood to have been moved to a different hotel from the team hotel, and are being monitored by a medical personnel behind closed doors. As a result of this development, Super kings have been forced to postpone the start of their training in Dubai to September 1. As per the original schedule, the team has to start practicing on 28th of August.

Meanwhile, on hearing about Raina missing the the season, people predicted that he is avoiding the season due to COVID 19 spread. However, reports emerged saying that Raina’s uncle has died followed by a midnight attack in their Pathankot’s Thariyal village while his aunt is critical. The report also mentioned that the attack was carried out on the night of 19th of August 19 when the family was sleeping on the terrace of their house.

However, the miscreants are still could not be identified. The attackers reportedly used lethal weapons against the family when they were sleeping. “It is being said that Asha Devi, sister of Raina’s father is fighting for her life in the hospital, while his uncle identified as 58- year old Ashok Kumar died in the attack.” reports updated. Suresh Raina’s cousins Kaushal Kumar and Apin Kumar have also attained injuries during the violent attack.

“Police officers of the jurisdiction have paced their investigation after knowing that the victims are close relatives of Suresh Raina. A team of forensic experts and police officials have collected the evidence from the spot. The police also took help from the dog squad to identify the attackers but failed to get any clue” the report added.

Fans of the CSK team are dejected on knowing about the update. They feel that the spot he plays for the team is hard to replace. It is notable that Raina have surpassed 400 plus runs in all the seasons of IPL tournament. The left handed batsman recently announced about his retirement from the International cricket along with his friend MS Dhoni.