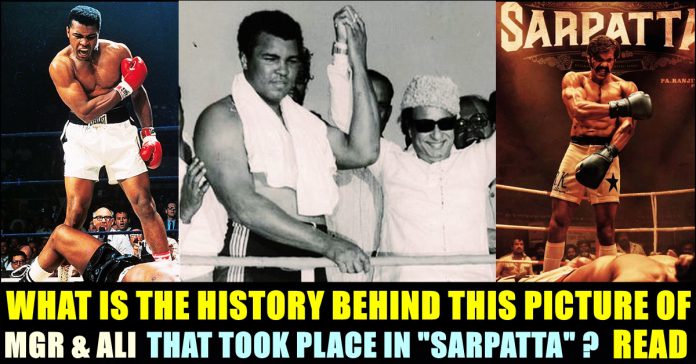 “Sarpatta Parambarai” of Pa. Ranjith released amidst much anticipations among the fans in the online streaming platform Amazon Prime and is receiving positive reviews from all the directions of the Internet. It has been reported that the “Kaala” maker had exceeded the expectation level of fans with his tight screen play and perfect castings. During the end credits of the film, running time of which is 2 hours and 53 minutes, a series of pictures of former Tamil nadu chief minister MGR holding the hand of American professional boxer Muhammad Ali took place and surprised the fans. As soon as witnessing it, fans are pretty much keen to know the whereabouts and howabouts of the historic event.

Pa. Ranjith who is known for raising voice for the oppressed through his art work, has raised the expectation level with his intriguing trailer cut and millions of fans have watched the film overnight, as soon as it got released in the OTT platform. Produced by Ranjith himself under his “Neelam Productions” and K9 Studios”, the film includes an ensemble cast that includes Pasupathi, John Vijay, Kalai arasan, Sanchana Natarajan, Kaali Venkat, “Gilli” Maaran and others.

The film is set in 70s and showcases the lives of the boxing clan that battled with each other in the North Madras. Lead Arya went through a major physical transformation to act in the film. Prior release, Arya expressed his belief on the film delivering a thrilling experience with action sequences and a storyline that would keep audience on the edge of their seats.

According to The Hindu, the event was organised by Tamil nadu state amateur boxing association and Apeejay. Muhammad Ali fought with the former heavy weight Champion Jimmy Ellis in the exhibition bout, says the report. The tickets for the match were priced at Rs. 100, 70, 50, 20 and 10 at that time. The star boxer was hosted by the Connemara hotel in one of its luxury suites and issued an advertisement with a sketch Muhammad Ali having a deep sleep.

A senior lawyer named Rabu Manohar who witnessed the match live as he was 17 at that time, said that MGR looked more youthful than Ali then, according to The News Minute. While narrating a funny incident, Rabu said that MGR got his dhoti stuck between the ropes when he was trying to get into the podium and he decided to jump in to get into it. “He was more youthful than Ali then. I still remember” Manohar said.

It was also reported that an elephant was brought to the show when Ali fought Ellis. Ali, reportedly inspired by the crowd that thronged at the airport to meet him and expressed the same to his wife. When Ali was questioned by a reporter on his weakness on the left hook, he challenged him to join in the podium. The champion boxed said “Son, in my 49 fights I have knocked out 32 of my opponents and I haven’t suffered much punishment. You see my face? Do you see any scars or disfigurements? It looks nice and clean isn’t it? That’s it, that is why I am the greatest.”, according to The Hindu.

Apart from Ellis, a school boy from Tamil nadu was also allowed to take a few swings at Ali during the historical event.

Usage of these pictures during the end credits of the film, shows how much research the makers have went through before making the film “Sarpatta Parambarai”. Have you watched the film ?? Comment your views on how much you enjoyed it !!

Previous article“Who Is Balakrishna ?” Is Trending In Internet After The Statement He Made Against A.R Rahman !!
Next articleDMK Reference In “Sarpatta Parambarai” Creates Debate In Social Media !!

Game Of Thrones has finally come to an end and for many it is an end of an era. After eight seasons and watching...