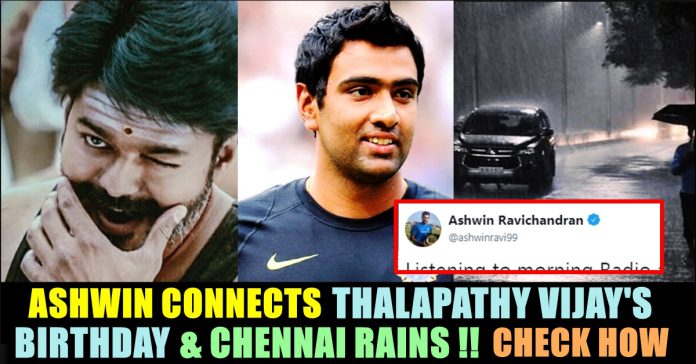 Heavy rains brought some respite to drought-hit Chennai on Thursday. The Indian Meteorological Department has predicted that rains will continue in parts of Chennai for next six days. 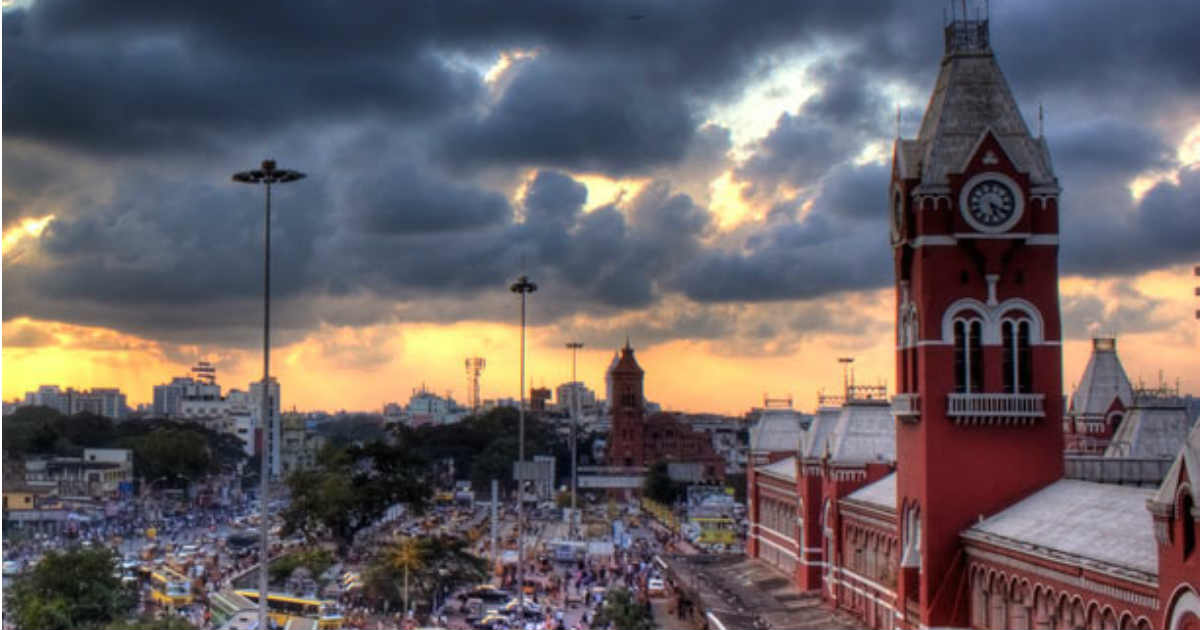 The rains come as a relief for the residents of the metropolitan city as they were reeling under an acute water crisis. Meanwhile Ashwin Ravichandran who is very much active in micro blogging social media site Twitter, connected Chennai Rains with Thalapathy Vijay’s birthday through his official twitter account.

The Captain of Kings 11 Punjab wrote “Listening to morning Radio and discovered that #ThalapathyBirthday and Chennai rains are directly proportional to each other. Advance birthday wishes to Actor Vijay and best wishes to Chennai rains over the weekend.”

Listening to morning Radio and discovered that #ThalapathyBirthday and Chennai rains are directly proportional to each other. Advance birthday wishes to Actor Vijay and best wishes to Chennai rains over the weekend.

Vijay who is fondly called as “Thalapathy” by his enormous number of fans, will be celebrating his 45th birthday tomorrow, 22nd June. Apart from his birthday, first look of his next release which is tentatively titled as #Thalapathy63 is eagerly expected by his fans.

On seeing this tweet from the cricketer, Fans of the actor got extremely happy and expressed their joy through their replies in comment section. Check out some of them here :

Thanks For You Wishes Sir

Thank you aswin sir for pouring your wishes on our Thalapathy ‘s birthday!
“””The two True Tamilians!””@actorvijay #Thalapathy63

Look what !!! I took a screenshot of this tweet when the number of Likes is at ***(22.6)K*** 22nd June 😁 Mother of coincidence 😉😉😉#ThalapathyVijay #ThalapathyAdhipathi #Thalapathy63FLDay pic.twitter.com/zaznM7ppNq

Recently Ashwin made headlines for the “Mankad” controversy. Mankading has become a widely discussed topic ever since Ravichandran Ashwin pulled off the mode of dismissal for the first time in this year’s IPL to dismiss Rajasthan Royals’ Jos Buttler. The act from Ashwin evoked mixed reactions from fans and cricketing experts around the globe.

The journey of “96” the film will break your hearts a hundred times over, leaving you alternately comforted and pained as nostalgia washes over....