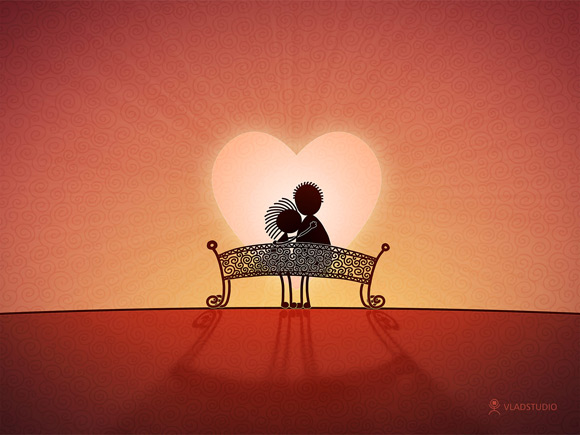 What is the origin of Valentine’s week?

There are several stories which may attribute the reason of Celebrating Valentine’s day as a symbol of romance.

1. “The story of Valentine’s Day begins in the third century with an oppressive Roman emperor and a humble Christian Martyr.   The emperor was Claudius II.   The Christian was Valentinus.

Claudius had ordered all Romans to worship twelve gods, and had made it a crime punishable by death to associate with Christians.   But Valentinus was dedicated to the ideals of Christ; not even the threat of death could keep him from practicing his beliefs.   He was arrested and imprisoned.
During the last weeks of Valentinus’s life a remarkable thing happened.   Seeing that he was a man of learning, the jailer asked whether his daughter, Julia, might be brought to Valentinus for lessons.   She had been blind since birth.   Julia was a pretty young girl with a quick mind.   Valentinus read stories of Rome’s history to her.   He described the world of nature to her.   He taught her arithmetic and told her about God.  She saw the world through his eyes, trusted his wisdom, and found comfort in his quiet strength.
“Valentinus, does God really hear our prayers?” Julia asked one day.
“Yes, my child, He hears each one.”
“Do you know what I pray for every morning and every night?  I pray that I might see.   I want so much to see everything you’ve told me about!”
“God does what is best for us if we will only believe in Him,” Valentinus said.
“Oh, Valentinus, I do believe! I do!”  She knelt and grasped his hand.
They sat quietly together, each praying.   Suddenly there was a brilliant light in the prison cell.   Radiant, Julia screamed, “Valentinus, I can see!  I can see!”
“Praise be to God!”  Valentinus exclaimed, and he knelt in prayer.

On the eve of his death Valentinus wrote a last note to Julia, urging her to stay close to God.   He signed it, “From your Valentine.”  His sentence was carried out the next day, February 14, 270 A.D., near a gate that was later named Porta Valentini in his memory.   He was buried at what is now the Church of Praxedes in Rome.   It is said that Julia planted a pink-blossomed almond tree near his grave.   Today, the almond tree remains a symbol of abiding love and friendship.   On each February 14, Saint Valentine’s Day, messages of affection, love, and devotion are exchanged around the world.”

While another story  is slightly different and might sound dramatic.

2. The Catholic Church recognizes at least three different saints named Valentine or Valentinus, all of whom were martyred.

One legend contends that Valentine was a priest who served during the third century in Rome. When Emperor Claudius II decided that single men made better soldiers than those with wives and families, he outlawed marriage for young men. Valentine, realizing the injustice of the decree, defied Claudius and continued to perform marriages for young lovers in secret. When Valentine’s actions were discovered, Claudius ordered that he be put to death.
Other stories suggest that Valentine may have been killed for attempting to help Christians escape harsh Roman prisons, where they were often beaten and tortured. According to one legend, an imprisoned Valentine actually sent the first “valentine” greeting himself after he fell in love with a young girl–possibly his jailor’s daughter–who visited him during his confinement. Before his death, it is alleged that he wrote her a letter signed “From your Valentine,” an expression that is still in use today. Although the truth behind the Valentine legends is murky, the stories all emphasize his appeal as a sympathetic, heroic and–most importantly–romantic figure.

3.Others claim that the Christian church may have decided to place St. Valentine’s feast day in the middle of February in an effort to “Christianize” the pagan celebration of Lupercalia.

Members of the Luperci, an order of Roman priests, would gather at a sacred cave where the infants Romulus and Remus, the founders of Rome, were believed to have been cared for by a she-wolf or lupa. The priests would sacrifice a goat, for fertility, and a dog, for purification. They would then strip the goat’s hide into strips, dip them into the sacrificial blood and take to the streets, gently slapping both women and crop fields with the goat hide. Far from being fearful, Roman women welcomed the touch of the hides because it was believed to make them more fertile in the coming year. Later in the day, according to legend, all the young women in the city would place their names in a big urn. The city’s bachelors would each choose a name and become paired for the year with his chosen woman. These matches often ended in marriage.

Lupercalia survived the initial rise of Christianity and but was outlawed—as it was deemed “un-Christian”–at the end of the 5th century, when Pope Gelasius declared February 14 St. Valentine’s Day. It was not until much later, however, that the day became definitively associated with love. During the Middle Ages, it was commonly believed in France and England that
February 14 was the beginning of birds’ mating season,
which added to the idea that the middle of Valentine’s Day should be a day for romance.

The rest is indeed nonsense

Previous articleWhat is the most interesting story from Indian history? #MyThoughts
Next articleDriver suffers heart attack, stops bus to save passengers

A number of shocking reports emerged alleging that Police have registered case against six members including Director Shankar's son-in-law Rohit in a minor girl...