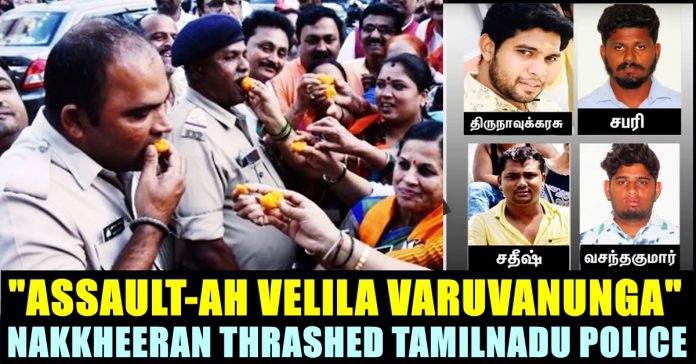 Popular journalist Nakkheeran Gopal has questioned what happened to the four accused in Pollachi rape and blackmail case. The journalist who bought the case to public attention by releasing a horrific video of several men torturing a girl physically, has questioned the Tamilnadu government after seeing the decision made by Telangana police in Priyanka Reddy rape and murder case.

While one set of people are blaming the police officers for killing the accused without getting them a legal punishment, another set of people are celebrating it by saying that it is a lesson to people who think of committing such crimes in future. Nakkheeran Gopal lies in the second category which is evident through the video he uploaded in his youtube channel which has more than 15 lakh subscribers.

In a massive twist in the development of the rape and murder case of Hyderabad Veterinary doctor Priyanka Reddy, Police officers have shot the four criminals alleging that they tried to escape while they accompanied the criminals to the scene where the crime happened to reconstruct it. It was reported that two policemen have injured.

Named as Areef, Naveen, Shiva, Chennakeshavalu, the four accused arrested by Telangana police the day after the crime took place. Four of them were shot dead in the same place where Priyanka Reddy was burnt by them. Police source have said that the incident happened at 6 AM in the morning.

Nakkheeran, in a way of reacting to the act of Telangana Police officers has questioned the Tamilnadu police about Pollachi issue. “Now the entire world is appreciating the police officers of Telangana by showering flowers on them for their brave act. Even people are showering flowers on the place where the murder took place. Hyderabad would have never seen such happiness before” said Nakkheeran to appreciate the Telangana police.

“We have provided evidence which is 100 times stronger comparing to Priyanka Reddy case in Pollachi rape case. In Priyanka Reddy case, all they found is a CCTV footage where the victim walks with her vehicle and the other evidence is her scooty and a dismantled number plate. After the four culprits accepts the crime they committed, Police killed them the next day in the place where the girl was burnt. Comparing the crime rate of both the cases, these pollachi accused tortured more than 500 girls which makes it 1000 times brutal than the Priyanka Reddy case” says Nakkheeran who thrashed Tamilnadu police for covering up the crime committed by the accused.

“On the day we submitted the CD evidence saying that there 1100 CDs are there, a local SP named as Pandiyarajan said that there is only three CDs and he also threatens everyone who are willing to provide more evidence.” says Nakkheeran in his video who went on to add that CBCID threatened him to arrest for providing evidence.

“In Hyderabad, they have provided solution for a crime in just 8 days whereas we still didn’t get any sort justice for 9 long months. The Goondas act against them was removed as i said and they are safe in Salem jail. Sons of a well known Deputy speaker of Lok Sabha are the influence for all these. ” said Nakkheeran who firmly believes that the accused will be released from prison in very few days. “Due to lack of evidence, they will be released from prison effortlessly like they removed the Goondas act. Because this is Tamilnadu and that is Telangana” he said in his video.

Previous articleRaghava Lawrence Responded To The Hatred He Is Receiving !!
Next articleFor Spreading Fake News Against Her, Indhuja Got Disappointed On Media !!

Veterinary Doctor IPS Officer Dr. R Stalin who is currently serving as the Assistant Superintendent of Police for Thiruvarur district, on Wednesday, came up...

For uploading a video with #SpeakUpIndia hashtag, actress Khushboo got mocked by her Twitter followers. Frustrated actress came up with an angry reply to...