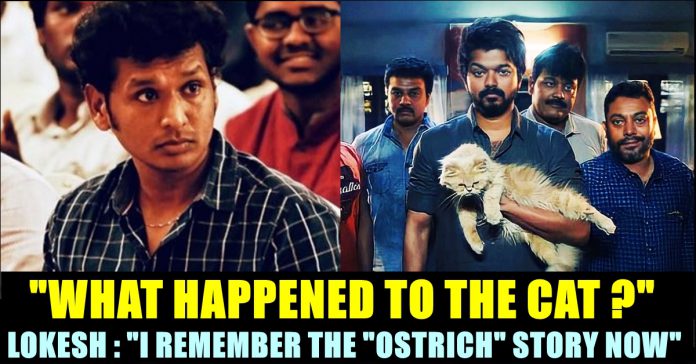 After the release of “Master”, Lokesh Kanagaraj decided to appear for an interaction for the first time with film critic Baradwaj Rangan for his youtube channel Film companion South. The young filmmaker shared about many things including about his upcoming film “Vikram” with Kamal Haasan throughout the 72 minute long interaction. At one point, the film critic asked him why he didn’t give two minutes for the cat of Vijay in the three hour long film. Answering to him, Lokesh referred the popular “Ostrich” dialogue in the film and it caused hilarious reactions in the internet as it grabbed the attention of the netziens.

“Master” shows Vijay as an alcoholic professor, contains Vijay Sethupathi, Arjun Das and Malavika Mohanan as a gangster, henchman and a college professor respectively. Locking horns with John Durairaj played by actor Vijay, Vijay Sethupathi who represented Bhavani, comes as a ruthless killer who uses juveniles as his pawns to establish his criminal enterprise.

In the detailed analysis Baradwaj conducted with Lokesh Kanagaraj, he asked many questions about the film which includes how he narrated the film to Vijay for the first time, the arcs of the characters in the film, the story plot, logic loopholes, fight sequences, song placements, castings etc. After asking many questions to the filmmaker, Baradwaj asked “What happens to Vijay’s cat ?”

Lokesh who immediately laughs, starts answering the question in a humble manner as he always do. “Actually we had a scene for that. When Vijay sir was held at the station, the college students would reach the spot with the cat. After fighting with the police to release him, they would leave the place with the cat” Lokesh said. “Due to length issue, not only that cat scene, many scenes were chopped” he added.

“Couldn’t you add 2 minutes for that cat?” asked Baradwaj to Lokesh to which the filmmaker replied “When you ask all these questions, I remember the Ostrich story from the film”. “You remember that because you know the real pain behind it ?” Baradwaj asked and Lokesh nodded yes in a humorous manner.

In the film, while talking with one of his accomplice, Vijay Sethupathi would say that he feels a bit of anxiety about the result of the upcoming election in which he is going to contest as a candidate. The assistant would reply that he would easily win the election as there is no one to oppose him. Replying to him Sethu would come up with the Ostrich philosophy.

“Have you ever heard of an Ostrich ? The egg it lays will be huge in size and that will look astonishing for us who are watching it but the pain will be felt only by the Ostrich” Sethu would reply. The particular scene went insanely viral in social media platforms for a particular word he used in the scene.

Check out some of the reactions for this reply of Lokesh :