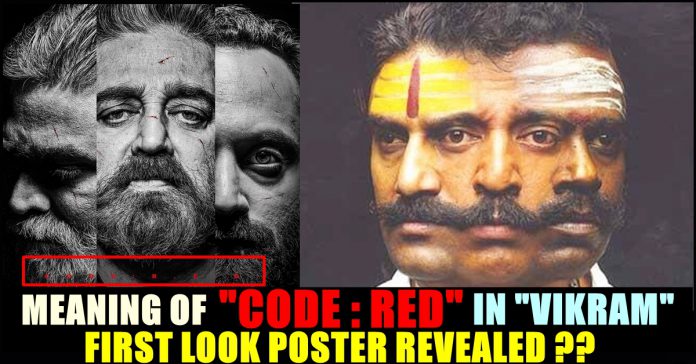 The most awaited first look of Ulaganaayagan Kamal haasan’s upcoming film “Vikram” directed by Lokesh Kanagaraj released in Internet on 5 PM of Saturday and became a point of discussion among thefans of Tamil cinema. When people were presuming Vijay Sethupathi or Fahad Fazil are going to play villain in the film, the filmmakers came up with a surprise announcing that both of them are going to feature in the film. The first look showed all the three of them in a monochrome effect with Kamal Haasan and Fahad fazil facing the camera while Vijay facing the earth.

One of the most awaited films in Tamil film industry post COVID 19 pandemic is Kamal Haasan- Lokesh Kanagaraj’s “Vikram”. The film’s title teaser which got released on the 66th birthday of the “Ulaganayagan”, became a huge hit among fans and created a huge anticipation among them. The teaser has garnered 15 million plus views in youtube so far.

“Vikram” which is going to be directed by the “Master” maker, is going to have Sathyan Sooryan as the camera man. Philomin Raj handles the edit whereas Anirudh Ravichander is going to compose music for the film. Kamal Haasan bankrolls the film under his own banner Raaj kamal internationals. Uploading the first look, Kamal Haasan wrote “Only valour should wear the crown “ I dare again to render before you the best of our talents. Like before, grant us victory!! Vikram …. விக்ரம்”

Lokesh didn’t give much through the poster as it contained the close up pictures of the three seasoned actors. However, the text ” CODE : RED” that took place in the poster grabbed the attention of the fans who came across the poster. The text was written using red colour font and fans highly believed that it has something to do with the film’s plot.

It came to their notice that Kamal Haasan had used the term “CODE : RED” in his previous directorial “Vishwaroopam”. In the film, he who played the role of an undercover agent of Research and Analysis Wing, would tell his wife the term “CODE : RED” to make his uncle believe that he is dead. Netizens believe that there is a connection point between Viswaroopam and Vikram as the announcement teaser had the protagonist handling deadly international weapons.

Many went on to compare the design of Vikram poster with Kamal haasan’s another directorial “Virumaandi” in which Kamal, Pasupathi, Nepoloean would be seen posing in a similar way. People lauded Lokesh Kanagaraj saying that he proved himself as an ardent fan of Kamal Haasan.

The epic Virumandi poster style revisited with #Vikram in 2021 👌🔥

Comment your views on the first look of Vikram !!

As soon as the report on Ravindra Jadeja taking over the captaincy from Mahendra Singh Dhoni surfaced, a number of fans started circulating one...