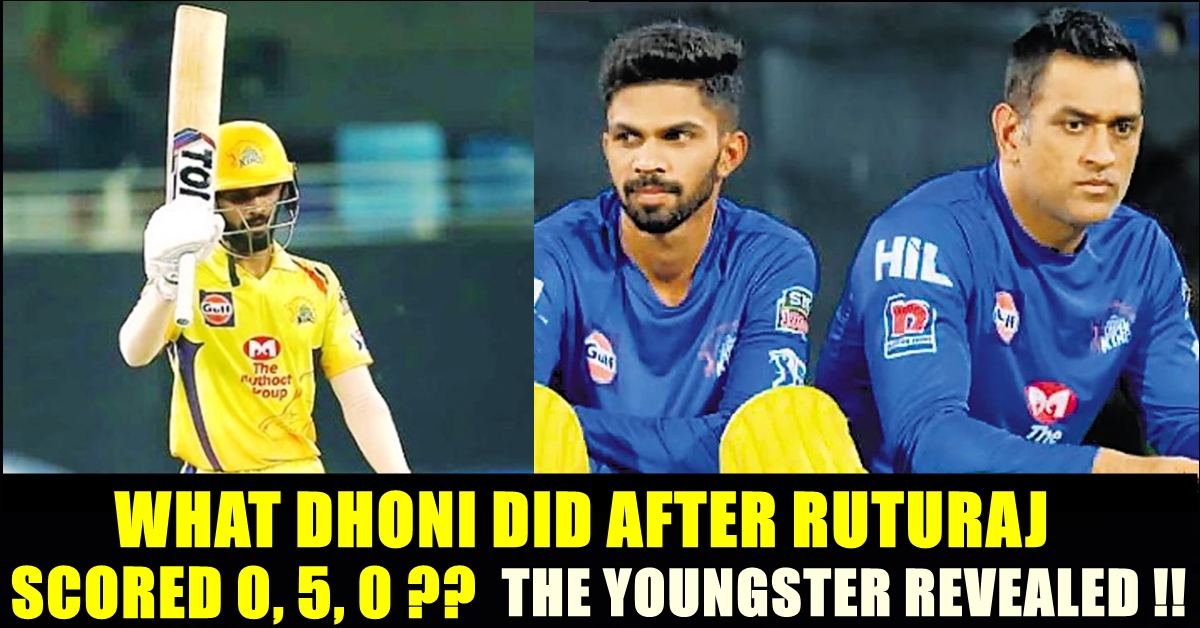 Ruturaj Gaikwad became the first uncapped player to score three back to back half centuries in the history of IPL tournament. He smashed his first half century against Royal Challengers Bangalore and helped team CSK to register their 4th victory in the tournament. He followed it up with a 72-run knock against KKR that helped CSK to a thrilling 6-wicket win, with a little cameo from Ravindra Jadeja towards the end. While playing against Kings 11 Punjab, Gaikwad capped his form with another brisk fifty, to remove team Punjab from the tournament.

Prior this achievement, Ruturaj’s scores in his first three matches he played were not impressive. He returned pavilion with two ducks and in a match he scored just 5 runs. After seeing these performances of him, Dhoni decided to go with experienced players such as Kedar Jadhav and Shane Watson. In a post match presentation of a game, Dhoni even admitted that he didn’t see the spark in youngsters to push them which created a huge debate in social media platforms.

“Fair enough, this season we weren’t really there. Also there were few chances to the youngsters. Maybe we didn’t see the kind of spark that they could’ve given us to say okay you know push the experienced guys and make space for them. But what this result has done is give those youngsters whatever is left in our league stages.” said Dhoni.

“They will get a chance and have no real pressure on them so they can go out and express themselves. And give us the option of looking at the other options in the batting lineup or where they’d like to bat.” he added while talking about the failure of CSK team in the ongoing tournament.

Now, as he said Rutu got opportunities to play the remaining matches of CSK and proved himself. He is highly expected to open the innings for CSK in the upcoming tournament. In the 6 matches Rutu played, he have credits for 2 ducks and 3 half centuries. He ended the tournament with an average of 51. It is notable that Ruturaj got infected with COVID 19 and was supposed quarantine himself for longer days comparing to other players.

Now, the cricketer came up with a social media post, revealing what happened when he scored 3 back to back low scores. In the post, Rutu added two photos of himself and Dhoni. One picture was from 2016 and the another one was from the 2020 IPL. Ruturaj said that himself went to him and talked when he made 3 low scores.

“October 2016 I met him for the first time fractured my finger during my debut ranji game,He was the mentor of Jharkhand ..And he himself came and asked me about how I am!!
October 2020..3 low scores,he himself came up and talked about life!!
Fortunate to be able to share the dressing room with him..
And more than a dream to share the 22 yards with him and Finishing things off!” read the caption of the 23 year old cricketer.

How it started👉🏻How it’s going.. 2016👉🏻2020 October 2016 I met him for the first time fractured my finger during my debut ranji game,He was the mentor of Jharkhand ..And he himself came and asked me about how I am!! October 2020..3 low scores,he himself came up and talked about life!! Fortunate to be able to share the dressing room with him.. And more than a dream to share the 22 yards with him and Finishing things off! 💛

Dhoni is known for backing up youngsters since 2007 T20 world cup. He believed in Johinder Sharma and gave ball to him to bowl the last over when he had a chance to go with Harbhajan Singh, an experienced cricketer. He also backed players like Rohit Sharma, Ravinder Jadeja and Virat Kohli who are now excelling in International cricket. Now, this post of Rutu proved it one more time.

Keerthy Suresh’s Fitting Reply To Her Haters !!
Suchithra Getting Slammed By Netizens For Her Biased Judgement !!
Advertisement