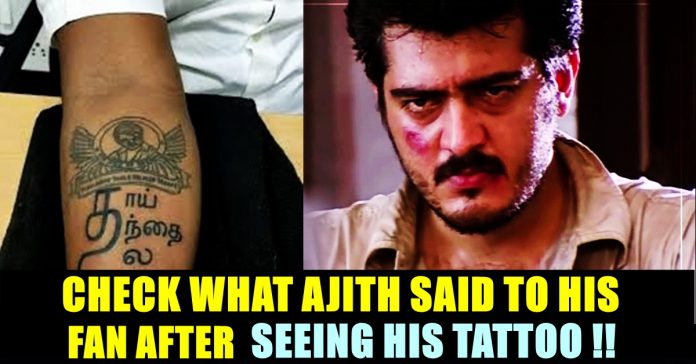 What Ajith Did When He Saw One Of His Fan Wearing His Name As Tattoo ??

Actor Ajith Kumar who has huge fan base in Tamil nadu despite of his very limited public appearance, always insisted his fans to look after his family instead of spending time and money on worshipping him. A TV actor named as Gemini Mani who is known for his acting in serials of Vijay TV has shared his experience with Ajith Kumar, whom admired a lot. Gemini Mani who had an opportunity to spend time with Ajith Kumar, shared how he reacted when he saw the tattoo of his name in Gemini Mani’s hand.

Ajith Kumar is an Indian film actor who works predominantly in Tamil cinema. In addition to his acting, he is also a motor car racer and participated in the MRF Racing series in Chennai. He began his career with a small role in the 1990 Tamil film En Veedu En Kanavar. Singer S. P. Balasubrahmanyam introduced Ajith to Tamil film industry by referring him to play lead role in Amaravathi.

Over the years, Thala did films like Aasai, Ullasam Kaadhal Mannan, Vaali and several other movies which showcased his acting skills. When Dheena happened with AR Murugadoss, he had risen as a ‘mass hero’. In fact, it was Murugadoss who coined the moniker ‘ Thala’ for Ajith. After Dheena, Ajith played larger-than-life characters and established himself as a commercial hero. Having over 50 films in his credit, Thala enjoys a cult following across Tamil Nadu.

Gemini Mani who was working with Gemini circuits as a driver, had an opportunity meet Ajith Kumar in a caravan. When Ajith saw the tattoo of his name in Mani’s hand, asked him what was written there as it was in tamil. After knowing that it is his name, Ajith didn’t say anything and remained silent, according to Mani.

“Did I do anything for you ??” asked Ajith to Mani and questioned him why he did it. “It won’t fade away, right ?” Ajith kumar further asked who also asked what is the use of the tattoo. Ajith kumar also asked Mani to “delete” the tattoo by taking medications. The “Veeram” actor also asked whether mani was married. He advised Mani to look after his family and avoid involving in such (wearing permanent tattoo) things as he is just an entertainer. “We are just making you people happy through the big screens. You don’t have to do these things” Ajith said to Mani.

The serial actor also added that Ajith advised lot more. However, Mani said that he didn’t remove the tattoo. In the last press notice Ajith released, the actor asked his fans to take care of their health. “My sincere request to my fans is for students to concentrate on their studies, for working people to fulfil their responsibilities, to respect law and order, to focus on health, to live in harmony and to show respect to humankind unconditionally. This would be the biggest respect and appreciation my fans can show me. Live and let live.” the actor said.

Previous articleWuhan’s Pool Party Frustrated The Entire World !!
Next article“He Committed Suicide Due To The Pressure He Faced For Constantly Following Vijay” – Actress

Online love is becoming more of a threat in recent times. An incident in Dindigul has shaken the people. A girl from Dindigul has been...

First Tweet Of John Mahendran After The Departure Of His Father Legendary Mahendran !! HEART BREAKING !!