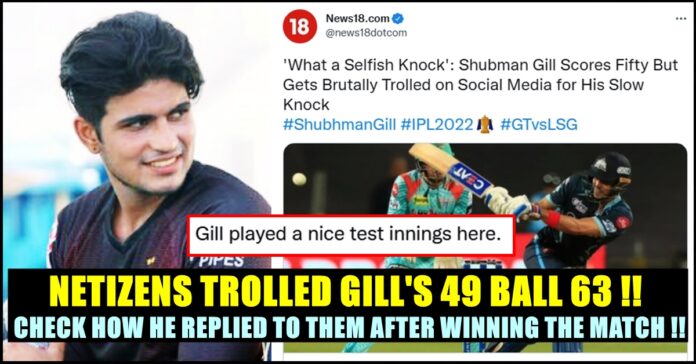 Emerging Player Shubman Gill who is currently opening for Gujarat Lions captained by Hardik Pandya, replied to trolls who criticized him for his slow innings after winning the match against Lucknow Super Giants. The opener scored 63 runs off 49 deliveries with a run rate of just above 100. As soon as seeing his innings, fans started criticizing his knock. However, his team managed to pull off a massive victory with a less total as a result of which Gill replied to his critics in style.

After winning the toss, Pandya led Gujarat Lions team opted to bat first. In the track which was believed to support batters, Gill who opened for Gujarat, played till the end of the batting innings managed to score only 63 runs. The team put 144 runs on the board as their total and it looked easy for the KL Rahul led team to chase the score.

Scoring just 7 boundaries in his innings, Shubman Gill’s strike rate of 128 got severely criticized by the fans in social media. Renowned news portal News 18 came up with compilation of troll memes that were targeted on Gill and made a report on it.

Shubman gill what a selfish knock
Another stat padder 👎 #GTvsLSG

Most selfish knock I saw this ipl season. He was not even trying to hit sixes till his 50 & also after that he was playing grounded shot! Wtf man u lose 4 w. & u scored just 140 around 🙄

However, Gujarat Lions managed to win the match with mammoth 62 runs difference as LSG got bowled out for 82 runs. With the win Gujarat made it to the Qualifier with 18 points and became the first team to qualify among the 10 teams.

Shubman Gill was named as the Man of The Match and the youngster, during the presentation, had said “Always pleasing when you’re there till the end and finish the game for your team. I didn’t expect the ball to seam as much at the start. It was nipping around, and then I expected the spinners to get some turn. I think they didn’t bowl up much. Had Krunal pitched it up, it would have been tougher. It helped us turn the singles over”

“Not a lot of people gave us a chance at the start, but great to qualify now. The ground was soft and I had a bit of back issues, but hopefully it would all be fine” he added.

At the early hours of Wednesday, Gill logged in to twitter and happened to see the report of News 18 and decided to give his reply to it. The young lad added the emoji of Turtle and Rabbit, denoting the famous story in which Turtle would win despite of it’s inability to walk or run faster.

Check out some of the reactions for his reply below :

You have been striking at 120 in the last two seasons. If not for LSG poor batting. That total cud have been chased easily. N this mindset of yours is the reason that despite so much potential you haven’t converted it yet at the big stage. No one said anything when u hd that 96 https://t.co/rr73BPvCXl

Be like king kohli, answer them with your bat. Aggression is good bro. https://t.co/IKwJZtRYwD

Bro Don’t fall in trap of social media. They will only fill your mind with negative. No matter how good you play, there will be some Chu on twitter will find a way to criticize you. Replying trolls in SM is the last thing you want to do.

Selvaraghavan was born in a Tamil family to film director Kasthuri Raja and Vijayalakshmi. He has a brother, Dhanush, who is an actor, and...

Raiza Crying Outside Theatre Because Of Fans Reaction On Her Debut !! Watch Video !!

After Kamal Haasan's Vishwaroopam 2, Pyaar Prema Kaadhal is the second biggest release of this week. Harish Kalyan and Raiza, who rose to fame...

Prithi Ashwin who was pretty much active in the micro blogging social media site during India's tour in Australia, was engaging her followers with...