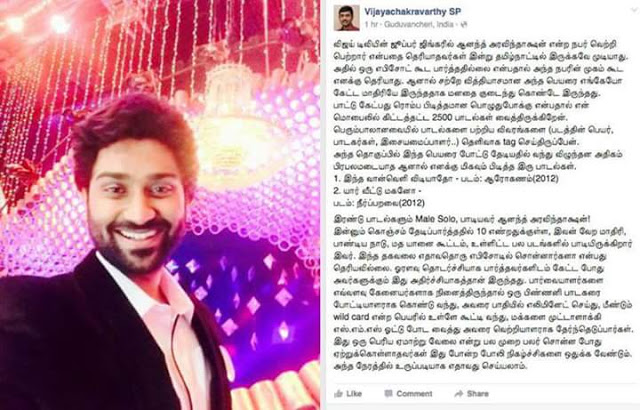 admin
March 22, 2016
Share
Facebook
Twitter
Pinterest
WhatsApp
Super Singer is a popular show in Star Vijay TV and has a lot of Audience. The Final of the fifth season of this show was recently telecasted and the winner was declared as Anand Aravindaksha. Audience were asked to vote via SMS and Website.
Anand Aravindakshan was found to be playback singer already and has sang many songs in films like Arohonam, Neerparavai etc. But he has never mentioned about this during any of the episodes.

This has created a buzz in the Social media and may has expressed their hatred to Vijay TV and stated that Vijay TV has done such thing for their cheap publicity !!
But still this news is not yet confirmed officially! Let’s wait and hear the Truth!
Previous articlePara-athlete shines at international meet
Next articleSoon You Can Board Metro Rail From Koyambedu And Get Down At Airport

"Kalyana Veedu" is a popular serial which has a huge viewership across the state. The serial is being directed by Thirumurugan who is fondly...

Popular television anchor and Political Analyst Sumanth Raman who is pretty much vocal in social media platforms about his political views, shared an old...