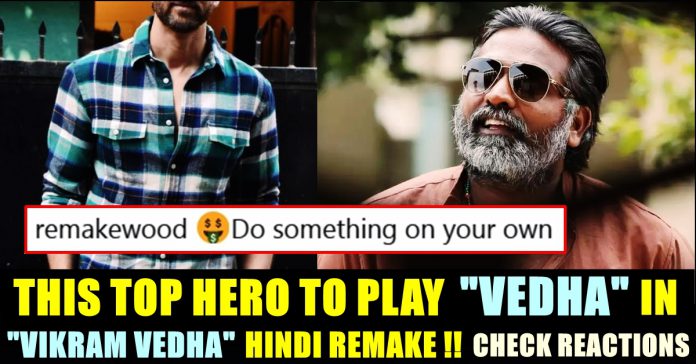 The official announcement on the Hindi remake of 2017 Tamil blockbuster “Vikram Vedha” has been announced by the makers of it on Friday. The original starred Ranganathan Madhavan as righteous police officer and Vijay Gurunatha Sethupathi as a seasoned gangster. The remake is going be directed by the husband and wife duo Pushkar-Gayathri who wielded the megaphone for the Tamil original.

Now, as fat as the lead characters are concerned, it has been confirmed that Bollywood Superstars Hrithik Roshan and Saif Ali Khan are going to reprise the roles of Vijay and Maddy who played Vikram and Vedha in the original. The cat and mouse crime thriller revolves around a good cop and a gangster who manages to escape every time the determined cop nabs him by narrating a story derived from his own life. The makers of the Tamil blockbuster said that they got the inspiration to write the story of “Vikram Vedha” while reading the ancient lore “Vikramathithyam-Vedhalam”.

Earlier, it was reported that Aamir Khan is going to do one of the lead roles and backed out of the project recently due to unknown reasons. “Hrithik Roshan & Saif Ali Khan to star in tamil blockbuster Vikram Vedha official remake. HR will reprise the role of Vedha & Saif will portray Vikram’s role.” said Sumit kadel, a trade analyst, while announcing about the project.

On seeing this update, many fans who watched the original felt disappointed and stated that an epic film like “Vikram Vedha” should be left untouched. When a number of fans expressed their disagreement over the castings, few asked why they are remaking the film now as the Hindi dubbed version of it is streaming in youtube with 6.5 million views.

Fans who are following the Bollywood cinema for a long time questioned why they are very much interested in remaking films instead of giving fresh movies to their audience. “Why can’t these people make original films. Lack of creativity?” a fan asked whereas another said “It’s impossible for anyone to match Vijay Sethupathi’s performance as Vedha tbh“

Welcome to bollywood aka remake factory;-)

Why can't these people make original films. Lack of creativity?

remakewood 🤑Do something on your own

When you have no content, they will start remaking movies from south🤣🤣😂😂

Comment your views on Vikram vedha getting a remake in Bollywood !!

Previous articleThis Contestant Got Evicted From The BIGG BOSS Show !!
Next articleActor Trolled Ramya Pandiyan For Her Behaviour !!