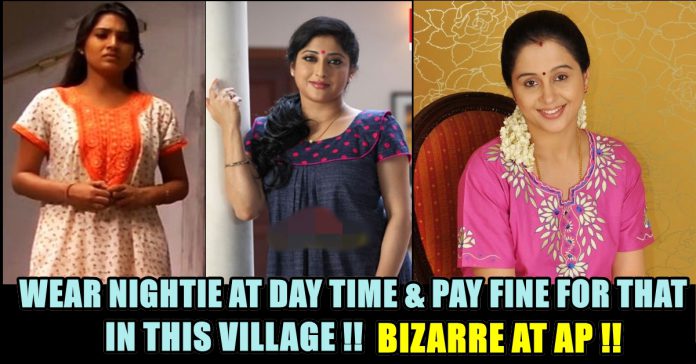 Women are forbidden to wear nighties during the daytime in Tokalapalli village of Andhra Pradesh’s West Godavari district. The elders of the village have decided that no woman should wear nighties from 7 am to 7 pm and if someone is found not following the ‘rule’, a fine of Rs 2000 will be imposed on her.

For the past nine months, the women of AP’s West Godavari district have stopped donning the comfortable, flowing nightie – all with accordance to a diktat issued by some village elders who decided that nighties are, well, meant for the night.

Furthermore, a ‘prize’ of Rs. 1000 has been earmarked for the person who informs village elders about women not adhering to the dress code.

According to a report in The Times of India, a nine member committee of elders in Tokalapalli village has issued a decree, according to which, any woman found wearing a nightie between 7am and 7pm will be fined Rs 2,000. What’s more is that, anyone who snitches on such woman will also be duly rewarded prize money of Rs 1000. It is being said that the money which will be collected through fines will be used for the development of the village, which comprises of 11,000 families and has a population of 36,000 people.

After reports of the new rule surfaced in local media, village’s Tehsildar Sundar Raju and police sub-inspector Vijay Kumar visited the area to analyse the situation. However, to their surprise, no woman came forward to oppose the decision.

In fact, a woman in the village, while speaking to the media said that there has been no such decision of fining the women. “It’s just a rumour,” said Saraswati. “In fact, women in the village have taken a decision not to wear night dress in the daytime and informed the elders in the village. It was then that they gave a specific time frame. But there is no such rule to collect fines from women,” she said.

Another villager, Krishna Kumari, said that they are “very happy” to follow the rules which were created by all the women in the village. “We all collectively took this decision to respect and follow our tradition,” she added.

Previous articleOdisha Woman Chopped Off The Private Part Of A Man Who Went From Chennai !! SHOCKING !!
Next articleBhagyaraj’s First Reaction After The Release Of SARKAR !! Watch Video !!

Social media accounts of team Chennai Super Kings is not only known for updating about the decisions took by the management, but also for...