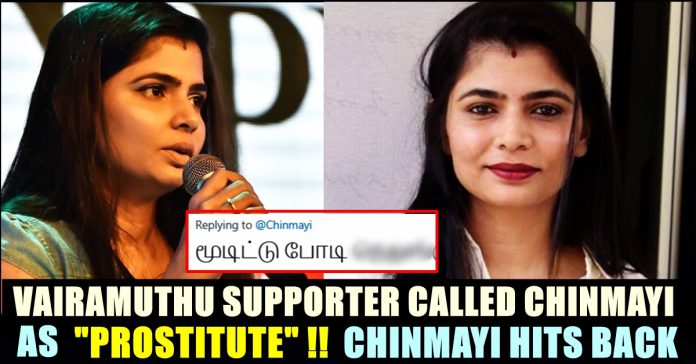 “We Will Celebrate Vairamuthu” – Fan !! Chinmayi Hits Back !!

Chinmayi replied to a series of trollers and abusers yesterday through her official twitter account. Since the news of Vairamuthu receiving an award for doctor of Literature from SRM institute surfaced, the singer has been expressing her opinion against it through tweets. In a series of tweets, Chinmayi said how cruel Vairamuthu as a human being is. She said that Vairamuthu molested her and 8 other girls in the past.

To her tweets many people posted negative comments and the singer replied to almost every one of them. One of a twitter user who seems to be a fan of the lyricist said “Trichy Temple needs a Devadasi. Please go.” in a way of mocking the accusations of the singer. On seeing the tweet she shared it and let her followers to see the tweet in order to show how supporters of Vairamuthu would speak.

How supporters of a molester in Tamilnadu speak. 🙂 https://t.co/6K0PkM71vZ

Followed by this another user abused the singer based on her religion. The singer who saw this too, said that their unity in supporting Vairamuthu tells the story of their society. Here’s her reply :

To our shock, another user indirectly termed the singer as “prostitute” to which Chinmayi trolled him back by saying that he is a science expert. Check that reply below :

To this reply of Chinmayi, the man again assassinated the singer’s character to which Chinmayi replied by saying that she wants a Vairamuthu to knock his door in the coming new year.

Chinmayi Sripaada has accused Vairamuthu by alleging that she was asked to “cooperate” and visit him in a hotel. In the wake of #MeToo movement, there are plenty of other women who have accused Vairamuthu on the basis on anonymity. But singer Chinmayi chose to tweet. She has recalled an incident that a concert organiser asked her to “cooperate” and visit Vairamuthu in his hotel room. She said this happened in 2005 or 2006.

What do you think on these replies provided by the singer and dubbing artist ?? Comment your views below !!