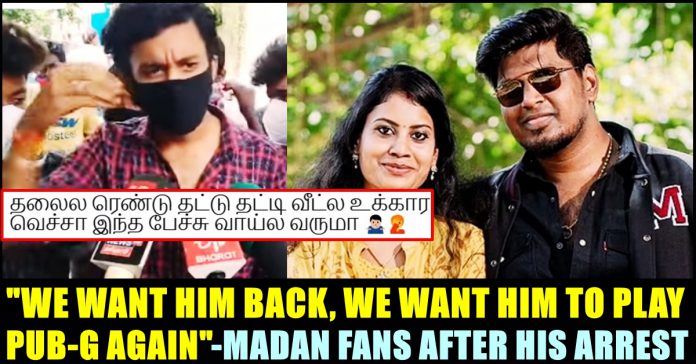 Video of Madan’s fans raising voice against the arrest of him doing rounds in social media platforms. They said that Madan’s motivational speeches encouraged them while facing depressions in their life. A youth said that he wants Madan to make his come back and play PUBG game again. “Every one of us had done something wrong in our life. I see Madan anna’s mistake as one such. I want Police officials to issue a warning and send him back” the youth said, video of which has created shocking waves in the Internet.

Madan Manickam who is popularly known as “Toxic” Madan or Madan OP, got arrested by a special team of police at Dharmapuri at the wee hours of Friday. He was accused of degrading women through his youtube videos by using obscene language. It is notable that Krithika, wife of Madan who helped him in uploading videos got arrested and is currently lodged in Puzhal jail.

“Their lifestyle changed after getting crores of donations from the subscribers of their channels, according to Vikatan. Madan used the bank account of Krithika and currently her account contains Rs. 4 crore of money” the official said. It is reported that most of the revenue they generated came from the donors comparing to the youtube income. He reportedly cheated his subscribers saying that he is going to help the poor and needy.

Police found that Madan provided money to the people who lauded him during live streaming. Madan is playing PUBG game for the past two years and the Police has been investigating on how he managed to earn 4 crores of money in bank with two houses and two luxurious cars, jewels etc. Now, a video of Madan fans extending their supportive hand to their rival is doing rounds in social media platforms.

“If you see two of his videos, you will become a fan of him. Though he speaks obscene language, his motivation speeches will encourage us. Every word he utters would ignite the fire in us. He would advised us to live happily even after facing heart breaks. He would tell that every one of us had done mistakes in our life and guide us. Show me one person who hadn’t committed a mistake here. I see Madan’s mistake as one such. It will be good if Police warns him and sends him back” he further said.

“We all became his fans and nearly 200 of us visited his house yesterday. We want him back. We want him to play PUBG again. That’s our request” he could be heard saying. Watch the video below :