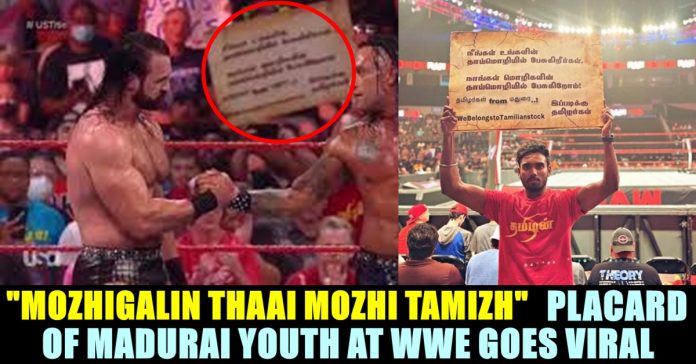 A Tamilian held a placard with Tamil wordings of Thalapathy Vijay’s dialogue in the WWE show which took at Oklahoma City in the United States is going viral on the internet user. Ajith Kumar Raman, a Madurai based youngster shares his experience in an interview with Behindwoods after watching the show WWE Raw live in the auditorium which was held on 30th of August, 2021.

A youth named Ajith Kumar Raman is an MBBS student studying at Georgia in Europe whose native is Madurai, Tamil Nadu. His elder brother is working in Oklahoma, America. Ajith Kumar went to the United States on his vacation. In the desire to watch the WWE show live, the Tamil siblings at Oklahoma planned to execute it.

World Wrestling Entertainment is commonly known as WWE. It is an American integrated media entertainment company that is primarily known for professional wrestling.

Ajith Kumar and his brother went to the show WWE Raw held on the 30th of August, 2021 at Oklahoma City in the United States. WWE Raw, also known as Monday Night Raw or simply Raw, is an American professional wrestling television program produced by WWE that currently airs live shows every Monday at 8 pm on the USA Network in the United States.

WWE is being on the costliest show, Ajith Kumar has spent almost Rs. 45000 to book a single VIP ticket. Being a Tamilian Ajith Kumar’s intention was to express something about the importance Tamil language and the Tamil people. Initially, he wanted to showcase the Eelam Tamilians issues. But this issue being a political one, he couldn’t use a placard related to it inside the auditorium.

Hence Ajith Kumar prepared a Placard with the wording, “You people speak in your mother tongue, but we speak in the language which is the mother of all languages” which is the reference to the famous dialogue that took place in Atlee’s movie, ‘Mersal’ starring Thalapathy Vijay. Ajith said that the dialogue inspired him to prepare the placard.

Ajith Kumar further shares his experience of watching the show live and states the difference between watching it on the tv and in the auditorium. Many people claim that WWE is a scripted show. Well, it is a scripted show which the WWE company also accept. It is based on an entertainment show as the word WWE is Stands for World Wrestling Entertainment. Ajith said more than being wrestlers they are good artists.

Check below the interview video by Behindwoods air.

Ajith Kumar further said that while watching the show on tv it is far more interested than watching it live. Sometimes in the show, the wrestlers may attack the audience. The interviewer questioned Ajith whether the audience attack is true or even it is scripted. To which he replied, it may also be scripted but sometimes very rarely it may not to which the company pay the issuance amount to the affected people. But this occurrence is very rare in the show.

Check below the comments by the netizens for the interview video.

Previous articleCops Getting Trolled For Performing “Bella Ciao” Ahead Of Money Heist Release !!
Next articleKangana Ranaut Slams Theatres That Refused To Screen “Thalaivi” !!

Youth Absconded After Marrying Lover With The Consent Of His Wife !!

Not many days ago, a report emerged saying that a middle aged guy married his lover with the consent of his wife. It was...

Ravindra Jadeja is one of the most prominent all rounders of Indian cricket team. His fight in the semi finals of 2019's world cup...