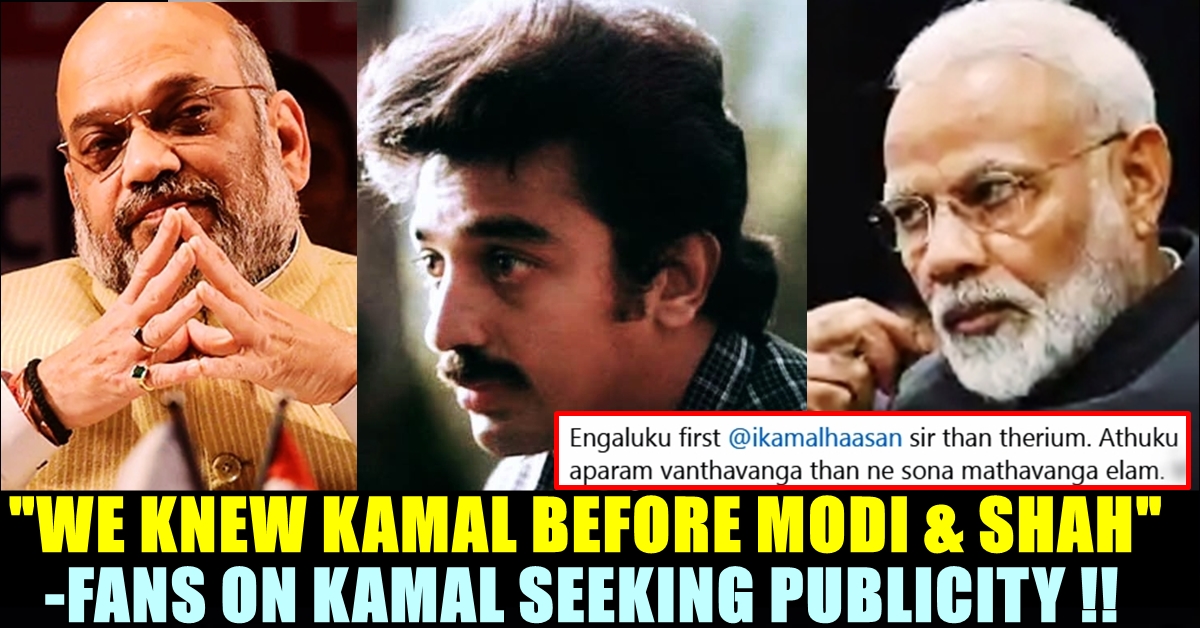 In the never ending saga of defaming top-tier actors, Meera Mitun who earlier accused Kamal Haasan of involving in Nepotism and supporting casteism, came up with a tweet saying that he is trying to gain fame by accusing Prime minister Narendra Modi, Amit Shah, MK Stalin and other politicians. She said it by attaching a video of Kamal explaining about “icon-bashing” in Bigg Boss show while addressing the issue that took place between Meera Mitun and seasoned filmmaker Cheran.

“There is something called “icon-bashing”. Some people think that they will be valued only if they attack renowned personalities. They also think that it is bravery” Kamal Haasan can be seen saying mentioning Meera Mitun. Meera Mitun accused director Cheran of physically assaulting her during a task in Bigg Boss show. Upon her accusation, Kamal Haasan displayed a “Kurumpadam” and proved that her accusation is false. In the episode, The “Ulaganayagan” actor also said that the original complaints of real victims will lose its value due to these kind of false allegations.

After nearly a year, Meera Mitun shared the video and said that Kamal haasan is the one who is involved in “icon-bashing”. She said that he is accusing Prime minister Modi, BJP head Amit Shah, MK Stalin and Edappadi pazhaniswamy to get into the limelight. “This is why I call Kamal Haasan
as a hypocrite, see he is preaching about “Icon Bashing” , his whole life is based on icon bashing by bashing Narendra Modi, Amit Shah, MK Stalin, Edappadi K Pazhansiwamy n other great icons. Practice before you preach” she said in her tweet by tagging the official twitter accounts of Kamal haasan and Makkal Needhi Maiam, his political party.

This is why I call @ikamalhaasan as a hypocrite, see he s preaching about "Icon Bashing" , his whole life is based on icon bashing by bashing @narendramodi @AmitShah @mkstalin @CMOTamilNadu n other great icons
Practice before you preach @ikamalhaasan @maiamofficial pic.twitter.com/DuTfmVQxyD

As usual, she got abused for her baseless allegation. Most of the twitter users who slammed her for this tweet, said that they knew Kamal haasan before knowing about Modi or Amit Shah. One of a twitter user said that Kamal Haasan doesn’t have any requirement to seek publicity as he became a nation wide icon years before.

Hahaha grow up lady. Kamal haasan is a big icon in India even before we heard the name Modi or Amit shah. He doesn’t require a popularity or brand when he entered politics.

Lately, she got criticized by fans for seeking publicity in Bala, a Vijay fan’s death who killed himself due to depression. She has been facing the wrath of entire social media including senior cinema personalities such as Bharathi Raja, Kasthuri, Chithra Lakshmanan for making derogatory comments on the personal lives of high profile actors.