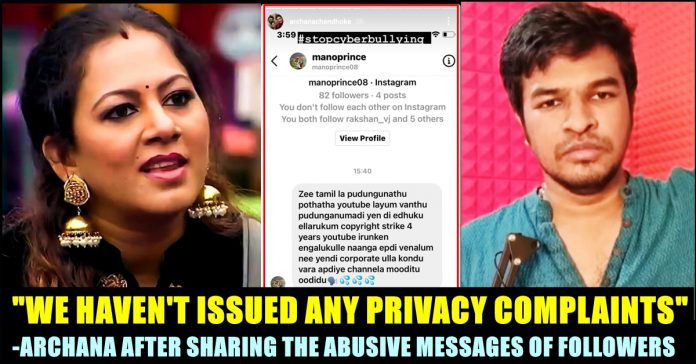 Most recently, Archana Chandhoke uploaded a video in her youtube “Wow Life” titled “Wow Life Presents “Achuma’s Bathroom Tour” Enga Veettu Bathroom ft. Archana & Zaara” which showed the Mother and Daughter duo showing their bathroom to their followers. The video garnered huge response from the followers of the youtube channel which is evident through the number of likes and reactions. So far, the video has garnered 3 million views with 77K plus likes and 83K plus dislikes.

Followed by the wide reach, the video also received trolls and hatred from the followers and the other content creators of youtube space. They trolled Archana for making a content out of her house’s bathroom. As a result, the troll videos started receiving copyright strikes for using the clips from the video uploaded by Archana and got deleted.

Madan Gowri, in his video, said that what Archana did to the small time youtube creators was legally correct but ethically wrong. He said that receiving hatred in youtube space is common and directly sent a message to Archana asking her to ignore negativity. He also encouraged the small time creators not to lose hope.

After uploading the video, Madan Gowri uploaded a post in his Instagram account which showed that his video about “Solo creators Vs Corporates” received privacy complaint. He received the video with a caption writing “Hahaha……..”

As soon as the post surfaced in Madan’s Insta space, Archana received enormous number of abusive messages, it seems. After sharing a number of screen shots which contained the abusive messages of Instagram users, Archana said that she didn’t issue any privacy complaint. Check out some of the screen shots she shared with hashtag “Stop cyber bullying” :

“Sharing a few messages that I have been receiving for an ongoing copyright strike
issue ! Abusive without knowing the whole story! We have not issued any privacy complaints or strikes after our LIVE chats with @thebiriyaniman and @thejasonsamuel There are some people who are taking advantage of the issue and playing fake! Don’t believe the rumours! Let’s please stop spreading hate and pray for the lives fighting the Covid ! This is an issue that can be sorted out amicably!!” Archana wrote in her post clarifying about the issue.

Previous article8 Year Old Tweet Of This Man About COVID 19 Virus Goes Insanely Viral Now !!
Next articleChinmayi Schooled A Follower Who Asked Her To Send “Nu*es” !!