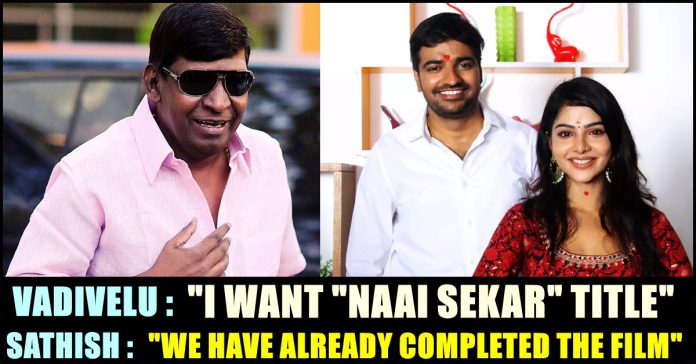 Actor Sathish reacted to the controversy of “Naai Sekar” title that took place after veteran comedian Vadivelu announced about his come back into the Kollywood film industry. The “Remo” comedian said that shooting of the film he is currently acting has got completed and firmly said that nothing can be done regarding the title change. He said that he himself remembers about Vadivelu while hearing the name “Naai Sekar” but the title was used for his film as a dog plays a pivotal role in the upcoming film.

On 16th of September, Actor cum producer Sivakarthikeyan who is enjoying 6.7 million followers in Twitter, came up with a tweet announcing about the upcoming film of actor Sathish “Naai Sekar” in which the latter is going to make his debut as a protagonist. It is very well known that “Naai Sekar” is a character name of actor Vadivelu in “Thalainagaram” film which became a huge success due to the comedy track of the latter. Most recently, Vadivelu who was struggling to get films due to the issues he had with a number producers and directors, recenttly announced his come back into the film industry through a press meet.

In the press meet, Director Suraaj who directed Vadivelu in “Thalai nagaram”, “Marudhamalai” and “Kaththi Sandai”, firmly believed that the title of his next film with Vadivelu is going be “Naai Sekar”. Days after he made the statement, the first look of Sathish-starrer got released by Sivakarthikeyan and the catchy title became a subject to controversy.

In the recent meet that took place, Director Suraaj, in his press meet, believed that he will get the title “Naai Sekar” to make his film. “Vadivelu will come to our mind if we say “Kaipulla”, “Encounter Egambaram”, “Veerabaghu”. If we say “Naai Sekar”, we can only get Vadivelu’s face in our mind. We can’t imagine someone else in that place” Suraaj said in the press meet.

“Those who registered the title are dear ones to Vadivelu sir. So we believe that we will get the title and the discussions are underway” Suraaj added.

However, days after the press meet, actor Sivakarthikeyan released the first look of “Naai Sekar” by saying “I feel very happy to release this first look as a fan of Vadivelu sir. Sathish, your responsibility has become higher, do it good. I wish the film to become a huge success” in his tweet. Check out his tweet below :

Meanwhile many fans came up with reactions saying that the title “Naai Sekar” would be apt only for Vadivelu. Now, actor Sathish, while interacting with press reporters, had said that the film’s shoot got completed and there’s nothing they could do regarding the title change. “A dog is going to be featured throughout the film. More like a double hero subject. That is the only reason behind us choosing that particular title” Sathish said.

“If we got an information about it before the shooting, we would have definitely gave him the title as me myself would get remembered of him while hearing “Naai Sekar”. As we have completed shooting, we don’t have any other choice than keeping it as a title for our film” Sathish added. Watch the video below :

Previous articleCheran Sends An Important Message To Losliya, His Bigg Boss Daughter !!
Next articleHashtags Against Periyar And Modi Are Trending On Their Birthday!!

Survivor Contestant Raised Voice Against The Show For The Injustice She Faced !!

Kalaivani who is popularly known as Lady Kash came up with a statement expressing her dejection over the organizers of the show for inflicting...