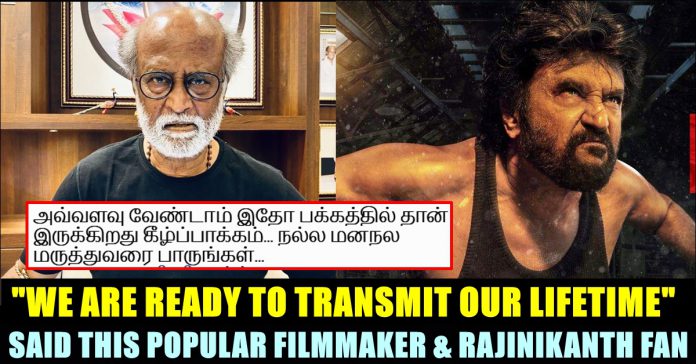 After Rajinikanth announced that he is not going to launch his political party, ardent fans of the actor felt dejected and has been expressing their disappointment in various ways. Many others understood the reason stated by the Superstar actor and accepted his decision with their whole heart. Meanwhile, film director Praveen kanth who is known as a die hard fan of Rajinikanth, in an interaction with a private television channel, has stated that the fans of Rajinikanth are ready to transmit their lifetime to their idol to make him live longer. He said that they are ready to do it by conducting a “Yaagam”.

Rajinikanth said that his health condition could cause financial setback and mental stress to the people who belongs to his party through a press statement he released in his official twitter account. Public people, cinema celebrities and political personalities started reacting in various ways regarding the decision made by the “Padayappa” actor.

After the shooting of “Annaththe” got affected due to COVID 19 virus, Rajinikanth decided not to enter politics. The actor says that he sees the interruption as a warning from the God himself. “I can’t make the revolution by just campaigning my party through social media platforms and media portals. Just a shooting that consisted 120 people made me to get hospitalized for 3 days. I have to meet lakhs and lakhs of people if I start a political party” Rajini said in his tweet who believed that his entry in politics will cause financial and mental stress to the people who belong to his party.

“I don’t want to make my believers scapegoat to prove that I am a man of my word. So I am announcing that I will not be starting a political party with grief. The pain I suffered while announcing this could be felt only by me” the Superstar actor said. “I will serve people without contesting in the electoral politics. I never hesitated to speak the truth.” said Rajinikanth and requested people to accept his decision.

Actor Kamal Haasan, Director Karthik Subbaraj, Actress Khushbu and many others respected the decision of Rajinikanth and wished him to live longer. Meanwhile director Praveen Gandhi who is known for directing films such as Jodi, Star, Ratchagan appeared in an interaction with Sun news and said that he will try to bring Rajinikanth into politics.

“A popular lyric from a song my own movie is trending in social media to express the disappointment. My feelings are also the same” said Praveen Gandhi. When the anchor questioned why he is not accepting the reality and wants Rajinikanth to enter politics despite of his health issues, Praveen says “We fans have decided to do one thing. Lakhs of us are ready to sacrifice one day, one week, one month or one year from our lifetime to our Rajinikanth. We are ready to do it by conducting a ‘Yaagam’.” says Praveen Gandhi.

He further says that Rajinikanth doesn’t even need that. “He has a whole different type of body. He sustained as “Superstar” even after getting hospitalised in Singapore. But I think, impure power is pressuring him not to launch the party” Praveen Gandhi said.

This speech from the filmmaker became a troll material as people across social media platforms started making fun of it.