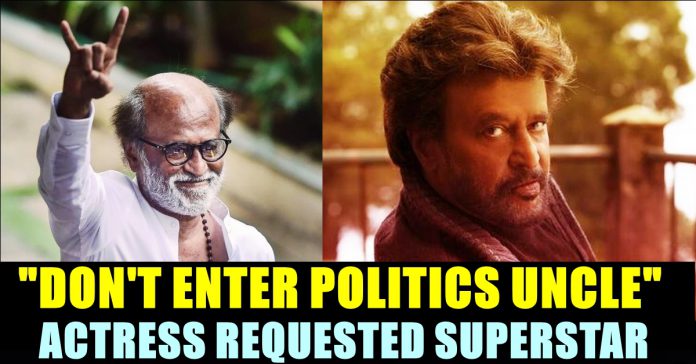 An unexpected bulletin from Apollo hospital, Hyderabad surfaced on Friday updating about the Superstar Rajinikanth’s admission in their hospital due to BP fluctuation. People who belong to Tamil film industry and prominent members of Tamil nadu Politics started reacting to the news, praying for the speedy recovery of the legendary star.

“Mr.Rajnikanth has been admitted in the hospital today in the morning. He was shooting for a movie in Hyderabad since the last 10 days. A couple of people on the sets tested positive for Covid-19. Mr.Rajnikanth was tested on 22nd December for Covid-19 and he was negative. Since then he isolated himself and was monitored closely. Though he did not have any symptoms of Covid-19, his Blood Pressure showed severe fluctuations and needed further evaluation for which he has been admitted to the hospital.” read the statement of Apollo hospitals.

“He will be investigated and monitored closely in the hospital till his blood pressure settles down before being discharged. Apart from fluctuating blood pressure and exhaustion he does not have any other symptoms and is hemodynamically stable.” the statement added.

Sources close to the actor said that he will discharged on Friday itself. Meanwhile, fans, celebrities and political personalities started praying for the speedy recovery of him and posted tweets expressing it. Telugu Superstar Pawan Kalyan released a press statement praying for Rajinikanth who earlier announced that he will be launching his political party on 31st of December.

Legendary filmmaker Mahendran’s son John Mahendran uploaded a video clipping from the film “Mullum Malarum” which was directed by his father and wrote “Get well soon sir” by tagging the official twitter account of Superstar Rajinikanth.

Chandra babu Naidu, Tamilisai Soundararajan and many others wished for a speedy recovery of Rajinikanth.

Deeply concerned about superstar @rajinikanth after hearing the news of him being admitted to a hospital today. Wishing him a speedy recovery and good health!

Meanwhile, actress Vanitha Vijayakumar who is known for her Bigg Boss stint, has posted a tweet requesting Rajinikanth not to enter politics and to look after his health. She said that people, along with her, want him more and added that there are only few days for this darn year 2020 to end.

“I pray to the almighty to give Rajinikanth uncle all the strength and bless him to stay healthy and stable. Few days to cross this darn year 2020 and everything will be better. Dear uncle Rajinikanth we don’t want u to enter politics and see you suffer.. we need u more.. god bless” read her tweet.

I pray to the almighty to give @rajinikanth uncle all the strength and bless him to stay healthy and stable. Few days to cross this darn year 2020 and everything will be better.Dear uncle @rajinikanth we don't want u to enter politics and see you suffer..we need u more..godbless

VJ Parvathy who became a familiar face among Tamilnadu youngsters in a very short span of time, has conducted a question and answer session...

India successfully defeated Team England in the first One Day International pretty much comfortably after beating them in the test and T 20 series....

India has been a male-dominant society from ages, and it is hard to believe that male can be a victim in a sexual assault....