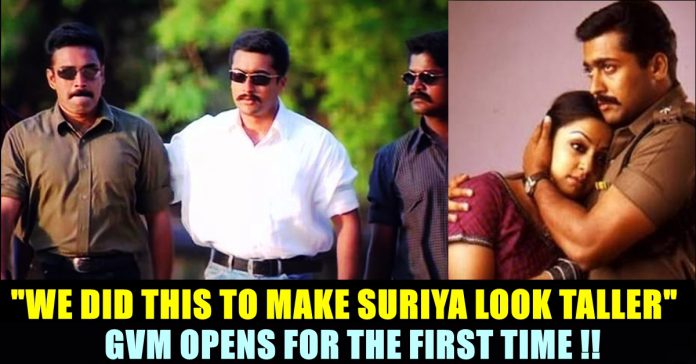 Gautham Menon appeared in an interaction with Film critic Suthir Srinivaasan to discuss about his blockbuster flick “Kaakha Kaakha” which celebrated its 17th year anniversary on the 1st of the August. The film which was released in the year 2003, acted as one of a biggest breaks in actor Suriya’s acting career. Along with Suriya and Gautham menon, the film contains some of other big names such as Kalaipuli S Dhanu, Harris Jayaraj, Jyothika, Daniel Balaji. After the film’s success, it got remade in several other languages due to its engaging plot and intense content.

The film’s plot revolves around Anbu Selvan, played by Suriya, a police officer, tracking down Pandya who desperately wants to take revenge on Anbuselvan for killing his brother, head of a criminal gang. In a way of celebrating the special event of the film’s 17th year anniversary, Gautham menon participated in the interaction and shared about many things that we audience were not aware all these days.

Starting from how the shooting of the film went on floors to the way he ended the film, Gautham discussed “Kaakha Kaakha” in his own uber cool narrative style. The filmmaker said that Jyothika is the one who made him to watch Suriya’s “Nandha” and asked him to narrate the script to Suriya. The filmmaker said that the film crew went on floors with 90 % of script with an extensive reading of the script. The filmmaker said that he and cinematographer R.D Rajasekhar wanted to make Suriya look taller in the film. “If you look closely, there won’t be any object that is taller than Suriya in his backdrop.” said Gautham vasudev menon in the interaction. “Mostly it was all low angles and making him look tall enough” he added.

“I narrated the script to Jyothika first and narrated it to her several times. She was the one who sent me to Ajith and Vikram to do the main lead. For various reasons, they couldn’t do the film and that is when she asked me to watch “Nandha”. After watching the film, I got impressed and talked to Suriya” Gautham Menon said. After discussing about many other things about the making of the film including the artificials sets and songs, Gautham talked about how Suriya risked his life for the final scenes of the film.

During the conversation, when Sudhir Srinivasan compared one of Suriya’s mannerism in a fight with his mannerism in “Nandha” film, Gautham menon went on to talk about the efforts made by the actor himself for the film. “Suriya’s effort was tremendous in the film. It was very narrow bridge which was a broken one. It was a small path and he had to run on it. We were all standing on the bridge with the equipment. He did everything to get ready for the shot.” said Gautham.

“To be in that particular mood throughout, he skipped eating for one or two days. Hee would stand upside down in order to make his eyes look bloody. I have seen him doing that.” said Gautham who also revealed that Suriya collapsed during one scene due to the lack of energy in his body.

Watch the video below from 44th minute :

“He was standing there around 6, 6 : 30. We were all ready for the shot. He fell down just like that which I saw through the lens. Due to the lack of food and the efforts he made, he went unconscious and fell down. Thankfully he fell down on the ledge. We all ran and picked him up. We cancelled the shoot on that day.” said Gautham to make Sudhir understand that it was Suriya’s own way of acting and he didn’t intentionally resemble “Nandhaa”.

Previous articleMadurai Auto Driver’s Unique Idea To Meet The Ends Amidst This Global Pandemic !!
Next articlePoster Of 10th Student Trolling His Teachers After Seeing His Result Is Trending !!