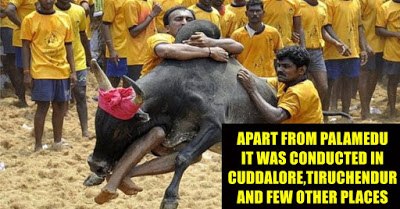 Yes. It happened.  Defying all the supreme court orders and PETA hanging with the dough, the famous bull taming sport did happen today, on the late morning hours here in Palamedu of Madurai district. Enraged PETA supporters are expected to hit the court soon says supporters of Jallikattu.

The bulls raged and soared amidst huge cheers from the crowd as the infamous sport took place. There was huge gathering and a huge number of youngsters took part in it. The police were mere bystanders as they couldn’t do anything to uphold the law, which against tradition did lose it’s value.

You can see the video here.

The ban on the sport was at high tension when the supreme court failed or rather dint heed to the request of the people to issue the judgement before Pongal. The failure of the Supreme Court which was expected to be successful for the side of PETA turned out the opposite as the Court taking sides sent fumes of anger amidst the youngsters.

Eventually, this led to the happening of Jallikattu in the village of Palamedu. Few more reports have come in stating that the sport was organised in small numbers at a much smaller scale in various other villages in the state of Tamil Nadu. It has happened in Sivagangai,Cuddalore,Tiruchendur and some other places. No reports are available on the arrests made by the Police department.

Earlier on yesterday the police have arrested some men based on preventive custody to make sure Jallikattu would not be conducted. But amidst all the doubts and confusion, the state have come strong and the youth have proved once again, companionship gives us strength and unity, gives us power.