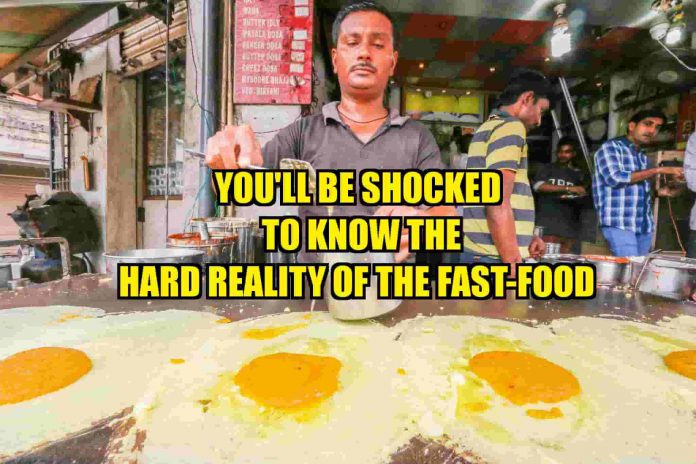 Fast food habits nowadays has been increasing drastically and even small children are getting addicted to it. So this article is to let you know about the  ill effects  of eating fast food! A fas, on condition of anonimity has felt guilty and closed his shop knowing the harm it would cause, now he is doing a work for which he is being paid every month.

He started sharing his thoughts by saying, we don’t buy chicken’s regularly for daily usage we use chicken’s that are one or two days old.

We generally  use vinegar for washing the chicken, so that the rotten smell goes unidentified by the customer.

To  obtain orange colour in the fried rice  we use artificial colours. Which contain the ingredients that causes cancer and it is also banned. For instance, try putting some powder in your hand and wash it and it wont fade away for a day. Then think about your digestive system in your body!

And the soya sauce is quite costly. So we don’t use raw soya sauce, instead, we use water or cooking oil that might be a week old. By mixing this we are using it as a substitute for soya sauce. No fast food shops are using refined sunflower oil, only palm oil is used. Another shocking thing is that, the crude oil which is used for motor vehicles, is refined and used for cooking fried rice! The main reason of using palm oil, its non sticky in pan. That’s why it is widely used and this causes Cholestrol. And also the vessels are usually not washed, If it has been washed the oil in the pan will be removed. If it is clean, the cooking process will consume a lot of gas, to obtain  proper consistency of the food.

Monosodium Glumete (msg)  which is also called as Chinese sugar contains high toxic substance that is being widely used for taste. If u just take a pinch of it and lick it, your taste buds will not be able to identify any taste for a while.

To obtain white colour in pepper they are adding white rangoli powder for food colouring. And papaya seeds, coriander powder are used as  substitute for pepper in many shops, since the price of pepper is high! The expired tomato sauce has low market  price they are bought by shopkeepers for consumption, if you smell the chilli sauce, you will be able to sense the rotten smell. With the addition of spices and other masalas we will not be able to smell these. Within 5 minutes 3 plates of fried rice will be ready.

Previous articleSHOCKING : Now Water Bottles Can Be Sold More Than MRP Price. WTF!!!
Next article10 cherishable memories that will take you back to your school days