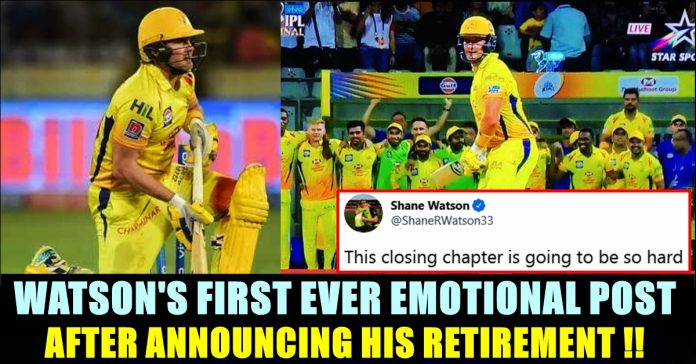 Shane Watson, former Australian all rounder and Chennai Super Kings player, came up with a video sending a message to the fans and cricket fraternity after his retirement announcement. Watson became the last player to retire from Australia’s golden era of the early 2000s. Watson made his ODI debut in a match against South Africa in the year 2002 on 24th of March. After announcing his retirement from International cricket in the year 2016, Watson continued playing IPL and other league tournaments.

Now, on Monday, news surfaced that the cricketer is retiring from the shortest format as well. Fans of IPL became emotional and posting messages to express their love towards the Aggressive all rounder. In his farewell edition of IPL, Watson played 11 matches and scored 299 runs for CSK with an average of 29.

Now, the cricketer released a video addressing his fans, followers, family members, mentors and many others who helped him through his cricketing career. He who said that his dream of playing cricket started when he was watching a test match as a 5 year old, officially announced his retirement through the video.

“I feel crazily lucky to have lived out my dream and then some. It really does feel like the right time. Knowing that I have played my last game of cricket ever for my beloved CSK who have been so incredibly good to me over the last three years. To think that I am finishing up my playing days as a 39 year old after all my injury setbacks that I had along the way, I feel so ridiculously fortunate ” said Watson in his message who thanked his Father and mother without whom he believes that he couldn’t have achieved anything.

The cricketer also thanked his sister Nicole, wife Lee and sent a cute message to his kid Matilda saying that her dad won’t be missing any special moments hereafter. He further thanked the teams he played with and the coaches her played under. Shane didn’t forget to thank his teammates for the friendships and memories they gave to him. He mentioned the love provided by fans as “humbling thing that you could ever experience” and thanked them for their patience during his injury issues.

He finally thanked the cricketers who inspired him to play the game of cricket. Sharing the video Watson, in a tweet wrote “This closing chapter is going to be so hard to top, but I am going to try. I truly am forever grateful to have lived this amazing dream. Now onto the next exciting one…”

This closing chapter is going to be so hard to top, but I am going to try.
I truly am forever grateful to have lived this amazing dream.
Now onto the next exciting one…#thankyou https://t.co/Og8aiBcWpE

“Farewell, our beloved legend #WattoMan. Thank you for all the #yellove’ly memories.” wrote the official twitter handle of Chennai Super Kings under his post.

Farewell, our beloved legend #WattoMan. Thank you for all the #yellove‘ly memories. 🦁💛

“Watson was very emotional when he told the CSK dressing room after the last game that he would retire. He said that it was a great privilege for him to play for the franchise,” said sources about his last moments with the CSK team.

Right from distributor Udhayanithi Stalin to Nadippin Nayagan Suriya, many celebrities came up with tweets in their respective social media handles, wishing Simbu and...