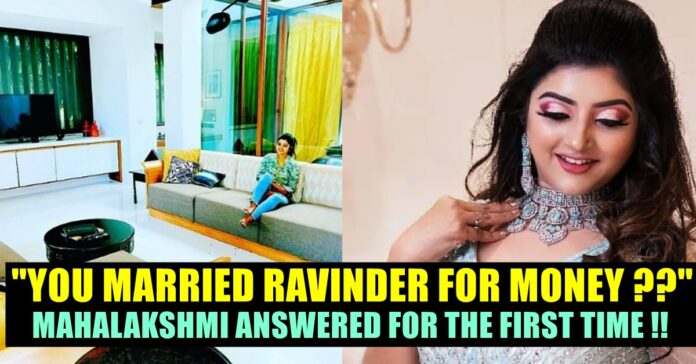 Television actress Mahalakshmi who recently married producer Ravinder Chandrasekhar, in an interview with Sun Television, answered to a question on whether she married him for money. The actress said that she is financially independent and has the confidence to raise her son on her own. Mahalakshmi said that she wanted no marriage initially but married him due to the way he approached her.

Days ago, Producer Ravinder Chandrasekhar who is known for making movies such as “Murungakka Chips”, “Natpunaa Ennanu Theriyumaa”, announced that he got married to famous TV star Mahalakshmi who started her career as an anchor in Sun Music channel. Uploading a couple of pictures from his marriage ceremony, the producer promised to stream a vlog in his youtube channel “Fat Man Facts” soon.

Known for his views on Bigg Boss show, Ravinder rose to fame after reviewing the show through prominent youtube channel such as Behindwoods and others. Uploading the pictures, the film producer wrote “People say that our life will be good if we get a girl like Mahalakshmi in our life, But I got a Mahalakshmi herself. Coming soon live in FAT MAN FACTS Kutty story with my pondatiiiii” in his post.

Though many wished the couple to lead a happy life together, they have been facing mindless trolls from the users of social media platforms after announcing about their marriage. Now, during an interview with Sun Television, the host asked whether she married Ravinder for his money.

Answering to the question, the actress said “I don’t have that necessity at all. My father is a great choreographer who worked in films such as “RRR”, “Ponniyin Selvan”, “Bahubali” and many more films in Telugu film industry. I myself earning enough as well. Even the reason behind me refusing to get married is my income. I have confidence about raising my son on my own” Mahalakshmi said in the interview.

“My only disadvantage is his tag as “Producer”. If there is no such tag for him, no one will talk this way, right ?? I liked him personally. Even if he is not a producer, I would have married him. If someone else approached me in the same way he did, my stand would have been the same. People talk this way only because he is a Producer. People who know me personally knows about me well” she added.

Elaborating on the same, Ravinder said that people need something to criticize them and they chose it as “money” in their case. Watch video :

Previous articleThalaivar Never Prepares For His Stage Speeches Like Others !! Here’s The Proof
Next articleCelebrities Mourned For The Demise Of Thoorigai !!

Bigg Boss Madhumitha is in news again but this time it seems the actress in in big trouble. According to the rules of Bigg...

Cinema celebrities in India who entered the industry with their father or God father's influence are being treated with so much hatred for fast...