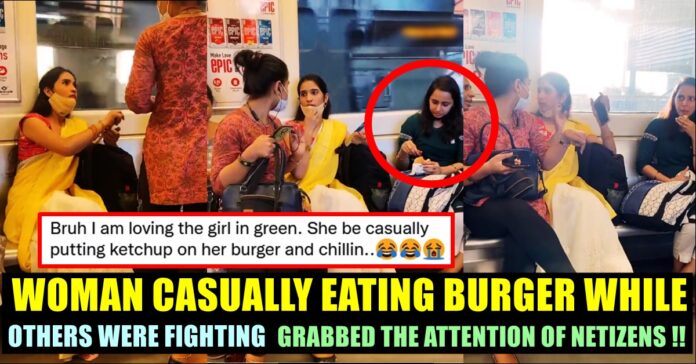 Video of two women arguing over the seating arrangement in Delhi metro is going viral among the users of online platforms with the users of it reacting in various ways. Not to our surprise, netizens found the video hilarious and the majority number of comments that surfaced made fun of the third woman who was sitting comfortably and enjoying the fight by eating burger. 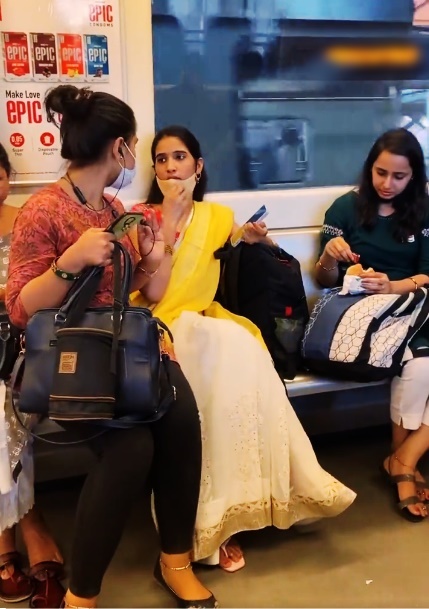 In the viral clip, we could see a woman in yellow saree is seated comfortably with her bag on an empty seat while a woman in orange kurta struggles to find a seat. The verbal spat begins after when the woman wearing saree says that she won’t offer the empty seat and the other woman decides to sit in the small gap between her and another passenger. 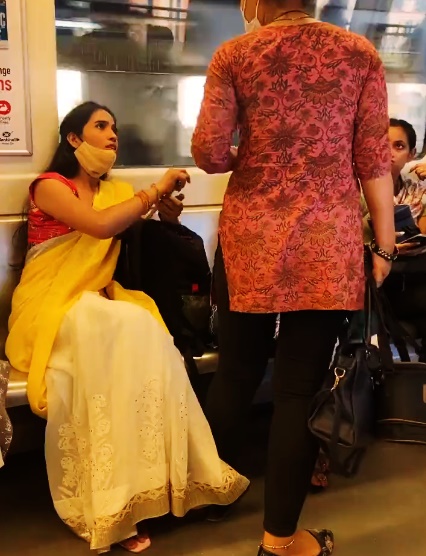 The woman who squeezed in the tight spot, says that she will complain to the security and the woman who occupied the seat with her bag responds saying that she can go ahead. In the meantime, another woman who is sitting beside them, was seen eating a burger in casual manner and enjoying the fight between the other two women.

The video garnered one and half views so far in twitter with hundreds of comments from the online users. Netizens who happened to see the video, found it entertaining and started making funny comments over the incident. “I want this calmness in life like that Burger girl..🥳” a user reacted seeing the vide whereas another one said “The girl casually eating her burger amidst all chaos has my spirit”

The girl casually eating her burger amidst all chaos has my spirit. https://t.co/kZZj0pQBC2

I want this calmness in life like that Burger girl..🥳https://t.co/RuiUnckJZ5

the girl next to saari wali didi is j chilling, eating her burger and enjoying 😭 https://t.co/nQWdqOmfM3

Those two bags occupying so much space, it could have made space for the standing lady https://t.co/o9N3xcYBfv

Bruh I am loving the girl in green. She be casually putting ketchup on her burger and chillin..😂😂😭 https://t.co/Ojj5iI6dJB

spiting the ketchup wrapper out there like uh https://t.co/z21t7JDJ65

Everyone busy watching the fight, I am not able to look past the burger wali didi just throwing away what looks like ketchup sachet piece on the floor 😁 https://t.co/TO1gy8WDzg

Love the vibe of the girl just going on eating her food (which is also technically illegal to do inside the Metro) https://t.co/wYCEdaETfc

Lol that saree clad woman and her companion are so unreasonable keeping their bags on seats meant for people. In some cities you would get punched for doing this on public transport. https://t.co/qsXibGT10V

Is it REAL? If it’s so, then these acts are absolutely wrong …. The other person could be tired too & deserves a seat as much you do, but there is so much love for the poor bag !! https://t.co/rzBN0Zhu3l

Previous articleCourt’s Statement On “Woman’s Clothes” Triggered Public !!
Next articleWATCH : Karthi Opened About The Disadvantage In Being Taller Than Suriya !!