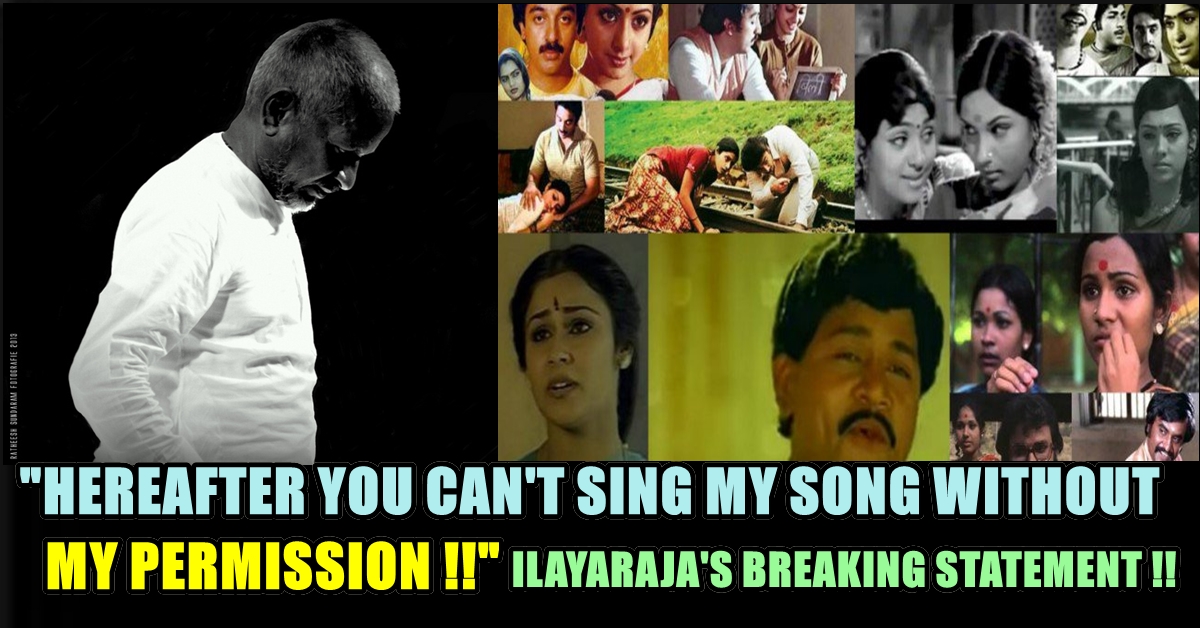 Ilaiyaraaja is an Indian film composer, singer, songwriter, instrumentalist, orchestrator, conductor-arranger and lyricist who works in the Indian Film Industry , predominantly in Tamil. Widely regarded as one of the greatest Indian music composers, he is credited for introducing western musical sensibilities in the Indian musical mainstream. Earlier, over a year ago, Legendary singer SPB took to his official page on social networking site Facebook to announce that he and two other singers, K.S. Chitra and S.P. Charan, had been served a legal notice by Ilaiyaraaja’s attorney, asking them not to perform his compositions. The notice stated that if they continued to perform his compositions, they would be breaking the copyright law and would have to pay huge financial penalties while also facing legal action. “Only I hold the right to all my songs. The money I would now get by selling the rights would be shared with the producer of the film, singers, and lyricists,” he said then.

Since the composer said he holds the absolute copyright to his works, he further warned that action would be taken against television channels and FM radio stations if they play his works without permission. Now after a year, the legendary composer has released a 2 minute video explaining about the matter in detail. He warns the singers who do programs performing his songs without his permission.

“Music artists, this is a new announcement. If you wish to sing my songs without prior intimation, legal action will be taken against you. This also includes people who play instruments, and you all have to realise this is wrong. From now onwards, the South Indian Music Artists Association will levy royalty fee for my songs.

Please understand I’m not stopping you from singing. You are paying royalty for the money you earn and not for my song. If you’re singing my songs for free, then you won’t have to pay money. Its a simple thing understand it clearly. However, if you are earning money by singing my songs, what is wrong in me asking a share of it?” said Ilayaraja in the video.

There is a reason why #Ilayaraja is called as a Maestro…

he is brilliant & that’s why small time singers use his songs to feed their families. Asking royalty is JUST UNFAIR pic.twitter.com/7FElbsVIHL

Check out some of the reactions he received for this announcement in social media :

Small time singers who were not so lucky to get a break into the industry, who make a living out of singing at small kutchery should now ask for permission from #Ilayaraja to sing his songs… otherwise they will have to face law? Really now!!!

What #Ilayaraja sir did is absolutely right…. People r earning money, fame from his masterstrokes ….. Let them reframe the copyright…

Rahman doing this marketing for so long, no one questioned him, Ilayaraja precisely updated with more clarity that anyone can sing his song without charging any money, if they are paid then royalties will come into place, he has every right to do this being a composer of 6k songs

He is claiming his legal rights, absolutely fair. #Ilayaraja ..❤ https://t.co/DgH8luYKD8

I have mixed feeling about Ilayaraja being so strict on royalties 🙁

It gives him a rude image, though he makes utmost sense …

But song in Indian context comprises of music and lyrics. Ilayaraja can lay stake to the tune but not lyrics. So when someone sings a song, they are not humming the tune. Very confusing in the Indian context.

We have craze on @thisisysr 😍😍 and #Ilayaraja
This is worst decision sir #please_convey to #Ilayaraja sir pic.twitter.com/xKIKg5xSh5

Few journalists don’t understand what is copyright and end user license. Without trying to understand these terms, they are making #Ilayaraja look being harsh on upcoming artists. Trying to be naive or misleading.

What do you think on this new announcement of the maestro ?? Comment below !!

Instead Nayanthara, Fans Wanted Rashmika As Heroine In Thalapathy 63 !! Here’s What Rashmika Has To say !!
Fans Worried For Veteran Filmmaker Cheran’s Absence In The Film Industry !! Check How The Director Responded !!