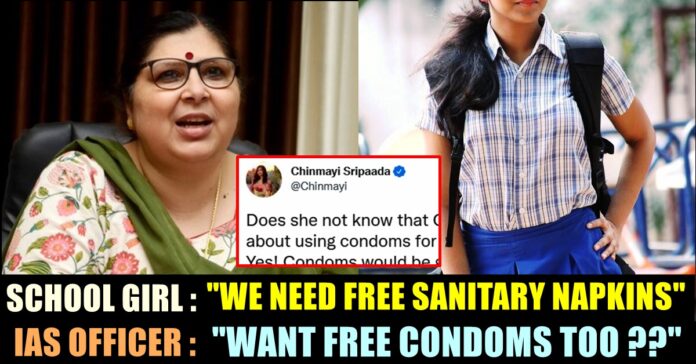 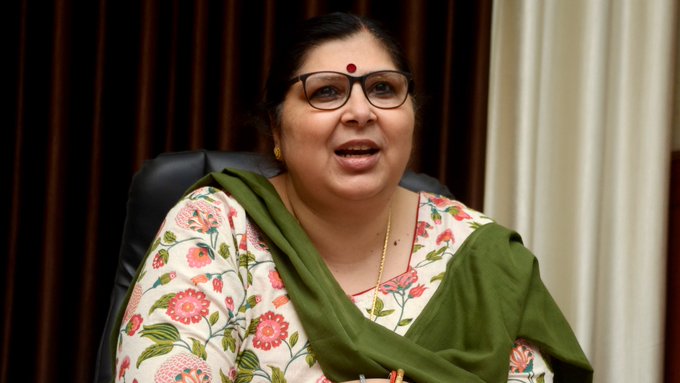 “Can’t the government provide us with the affordable sanitary napkins that comes for Rs. 20-30, a pack” asked a school girl during an one-day work shop titled “Sashakt Beti, Samridh Bihar. Towards enhancing the value of girls in Bihar”. organized by WCDC in partnership with international NGOs on Tuesday. 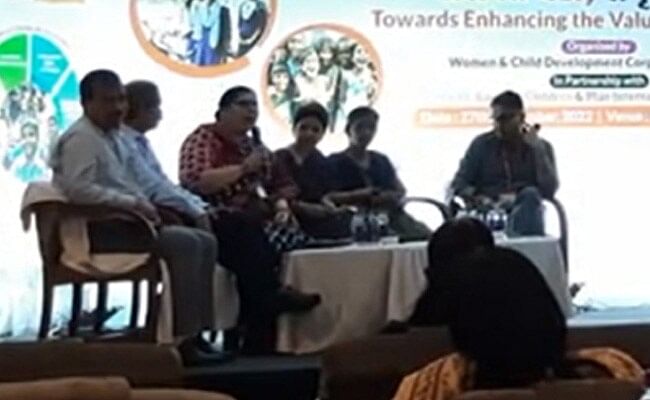 In a way of replying to the girl, the senior IAS officer said “Is there any end to such demand ? Tomorrow you can ask for jeans, then beautiful shoes and finally when it comes to family planning, you can say the government should give condoms too”, to the girl. After feeling a bit humiliated, the girl said that she won’t vote for the government in the next elections.

Kaur said “You don’t need to vote. It’s the height of stupidity” to the girl. Watch the video below :

The incident created huge outrage among the public. South India’s “Me Too” representative Chinmayi came up with a tweet in her official twitter handle, writing “Does she not know that Govt was actively speaking about using condoms for safe sex? Yes! Condoms would be great, thank you, Madam. Perhaps sex education would be even better. While at it please to learn about period poverty” as her reaction to the awful incident with many others reacting in several ways.

Check out some of the reactions that surfaced in the Internet regarding the incident :

Does she not know that Govt was actively speaking about using condoms for safe sex?
Yes! Condoms would be great, thank you, Madam. Perhaps sex education would be even better. While at it please to learn about period poverty https://t.co/V3u0svIlGY

Bleeding is not a choice. Period products are inaccessible for many. Comments like ‘do you now want condoms too?’ will discourage young people from speaking up and deepen the silence around period poverty. Make essential hygiene and sexual health products — condoms too — free

Scotland becomes the first country in the world to provide free sanitary products, part of a global effort to end “period poverty”

Dream of Vishwa guru, and behave like a Sanatani Scoundrel👺 https://t.co/nJa2LanRDh

That officer in Bihar thinks she slayed by saying want free condoms too
Like gurl, yeah. Population dekhi hai? You should be giving free condoms on home delivery bro

Due to the social media uproar, Kaur came up with a clarification seeking apology and said that she didn’t intent to humiliate the girl.

I express regret if my words hurt any girl’s sentiments. I didn’t intend to humiliate anyone or hurt anyone’s sentiments: IAS officer Harjot Kaur Bhamra on Patna incident where she asked a schoolgirl if “she wants condoms too” when the latter asked for affordable sanitary napkins pic.twitter.com/kNb0Ln2yJc

Previous articleYouth Absconded After Marrying Lover With The Consent Of His Wife !!
Next articleManirathnam Finally Opened On The Comparison Between “Bahubali” & “PS 1” !!

Vishal Wished Stalin By Calling Him “Uncle” !! Followers Got Shocked & Trolled Him !!

The coronation of M.K. Stalin on Tuesday, though long-expected, had all the ingredients of a poignant political drama. The grand event at the packed...

Telugu actor Naga Chaithanya's reply to young and emerging actress Krithi Shetty in Twitter after she wished him for his birthday, has garnered the...