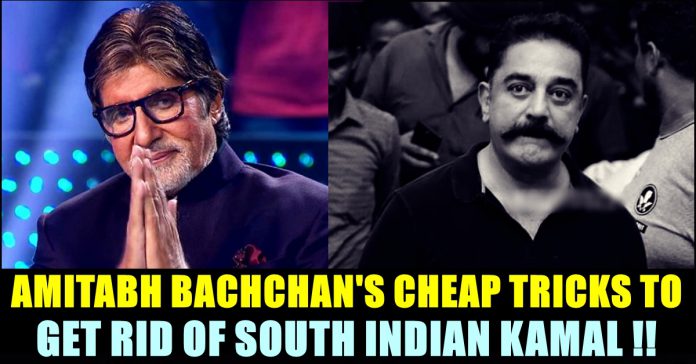 Being considered as one of toppest actors by having more than 190 films to his credits, Amitabh Bhachchan is a dear friend to both Rajinikanth and Kamal Haasan with whom he shared his screen space in Bollywood films. Unfortunately, Amitabh is yet to make his debut in Tamil film industry whereas Rajinikanth and Kamal Haasan made significant movies in Bollywood industry.

“In that film which was directed by S. Ramanathan, both Amitabh Bachchan and Kamal Haasan were roped in together. It was shot halfway but was dropped when Amitabh Bachchan intervened. As per the story, Kamal Haasan should die at the end which is the only way to conclude the story. If he dies the character of Amitabh Bachchan would be overshadowed and will make no impact in the audience. Knowing about this, Amitabh Bachchan asked the director to drop the movie and accepted to give compensation. ” said Bhagyaraj in the interview. According to Bhagyaraj, Amitabh felt that letting a south Indian actor to ruin his career is not a sane decision.

Watch the video which is doing rounds in social media below :

It is astonishing to realize that Kamal Haasan who never shied away to talk about his personal experience and humiliations he faced in the past, kept mum about this incident. Watch the full interview of Bhagyaraj here :

On the other hand Kamal Haasan, who just completed his hosting Bigg Boss Tamil-3, is currently shooting for Indian-2 directed by Shankar. He is also planning to direct his 5th directorial “Thalaivan Irukkindraan” and successfully leading a political party.

Comment your views on this unknown fact about these two legendary Indian actors !!