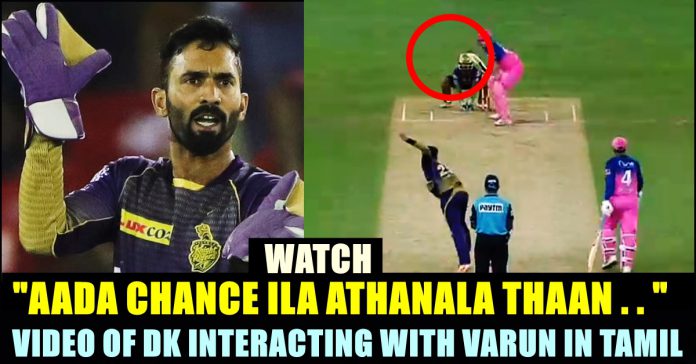 WATCH : The Most Wanted Video Of Dinesh Karthik Interacting With Varun In Tamil !!

In the yet another one sided game of this ongoing IPL tournament, an interesting incident had took place only to leave the Tamil speaking cricket watchers in a blissful state. The Dinesh Karthik led men posted a decent 176 runs on the board and restricted their opponents to just 137 runs and won the match comfortably. The powerful Rajasthan Royals which looked dangerous with their strong batting line up, couldn’t manage the bowling attack of Kolkata Knight Riders.

The 21 year old Shivam Mavi who took 2 vital wickets with an economy of just 5.00 received the man of the match award. Sachin Tendulkar lauded the performance of the purple team and appreciated Dinesh Karthik’s captaincy by saying that he did good bowling changes.

& a fantastic catch by the athletic Nagarkoti.@TC59’s 54 towards the end got @rajasthanroyals to a respectable total.#RRvKKR #IPL2020

With the win, KKR reached the second spot by pushing Rajasthan and Bangalore to third and fourth place. Apart from the win, what grabbed the netizen’s attention the most is, the way Dinesh Karthik interacted with his leg spinner Varun Chakravarthy using Tamil language during the middle of the overs.

The Tamil nadu based mystery spinner Varun Chakravarthi, was the leading wicket-taker for Tamil Nadu in the 2018–19 Vijay Hazare Trophy, with twenty-two dismissals in nine matches. He made his first-class debut for Tamil Nadu in the 2018–19 Ranji Trophy on 12 November 2018. As we all know, Dinesh Karthik who played for India in several matches also belongs to Tamil nadu.

During the start of 11th over, when Tom Curran and Rahul Tewatiya were in crease, Dinesh handed the ball to Varun. When the captain was adjusting the field, Varun who called his captain, gestured that he needs a field change in off-side. Responding to that, Dinesh, effortlessly says “Illa la . . ithu Aada chance illa athanala . . Paakalam” (No. . No . . There is no chance for him to hit the ball that way. That’s why. Let’s see). Being a wicket keeper, he got caught in the stump mic.

Here’s an another video clip of the cricketer talking in Tamil :

This is not the first time Dinesh using the language to interact with his teammates. During International matches, while playing with Tamil nadu players like Ashwin, Dinesh made the headlines for giving him suggestions and appreciations in Tamil. Not only Karthik, even Dhoni and other Indian wicket keepers would use their regional language to avoid their foreign opponents understanding their game strategies.

However, on hearing their language being spoken in an IPL match, that too in a match between two north Indian teams, Tamil speaking IPL fans couldn’t keep as they started memes and posts.

Tamil Nadu boys doing it in style with TAMIL ❤😍

Dinesh also helped Shivam Mavi who received the Man of the Match award in the post match presentation.

@DineshKarthik spoke to @mmbangwa for @ShivamMavi23
You have my heart DK
people ask me why still he the captain of @KKRiders .I would say he is the only man in team who can communicate to everyone.Such a gentlemen #KKRHaiTaiyaar 🤝🏏 his chits-chats with Varun in tamil 😆🤘 pic.twitter.com/tO4Ma7GLdq

Previous articleVijay TV Failed To Issue Payment For This BIGG BOSS Contestant ??
Next articleKasthuri Continues To Slam Vijay TV Regarding Her Payment Issue !!

Hashtag "பால்வாடி பாஜக" which roughly translated as "Pre Kindergarten BJP" is trending in the micro blogging social media site since Monday morning after the...

This Vijay TV Star Got Brutally Trolled For Consoling Sandy !! Check Out Why !!

The third season of Bigg Boss 3 is the most happening reality show among Tamil TV audience. The show involves 16 contestants with both...