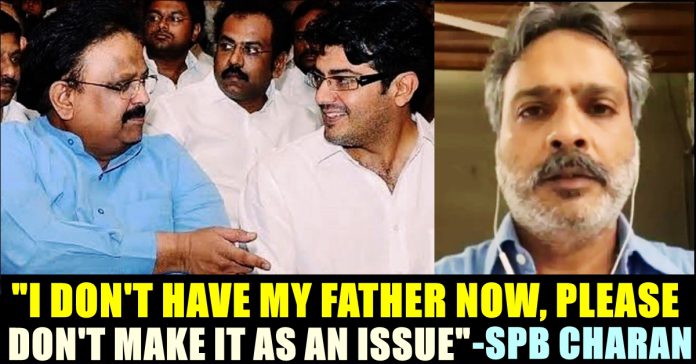 After so many speculations among fans and media portal;s regarding actor Ajith Kumar’s absence in the funeral of legendary singer SPB, his son SP Charan came up with a statement saying that it doesn’t matter at this time. After Vijay went to Thamaraipaakam in person to pay his final respect to SPB , fans started questioning why actors like Rajinikanth, Ajith, Kamal Haasan didn’t make their presence. However, a set of people believed that they could have avoided the funeral as their arrival would cause heavy crowd gathering which is not good for people at this pandemic situation.

The singer’s funeral was held at his Red Hills farm house in Thiruvallur district of Tamil nadu which is 50 KMS far from Chennai. The funeral took place with complete police honours. Vijay visited the place and consoled SP Charan, son of the legendary singer. SPB acted as Vijay’s father in Priyamanavale movie and lent his voice for Vijay in songs such as Oru Kaditham, Enna Azhagu, Azhagooril Poothavale.

Legendary singer SP Balasubramaniam who was getting treatment since August 5 due to the infection COVID 19 virus, died at MGM hospital on Friday noon. Music lovers, SPB fans, cinema stars and several other people who belong to various field shattered on hearing the news. The gesture of actor Vijay visiting the funeral irrespective of COVID 19 risk, was hailed by his fans in social media platforms. Director Venkat Prabhu uploaded a post respecting Vijay.

This post from the filmmaker triggered the online fans to question why Ajith and Rajini didn’t come. Not only common fans, even political analyst and doctor Sumanth Raman also asked similar question and too an indirect dig at the top tier actors.

Now, in a way of answering to them, Saran said that it doesn’t matter now. “There is no necessity for him to reach the funeral in person. If he is grieving, let him grieve wherever he wants. Ajith is a friend to me. He is a friend to my father as well. It doesn’t have to do anything with his presence in the funeral” said Saran.

“What is it have to do with the current situation ? It doesn’t matter from where he is paying respect. It is not a problem now.” said Saran. When a press reported asked whether Ajith spoke to him, Saran said that it is an irrelevant question now.

“We don’t have to make an issue out of it. I don’t have my father now. For the world , SPB is no more. We are all in grief. We need to come out of the grief now. This is not a problem now” Saran said.

It is notable that SPB played a big role in actor Ajith’s acting career. Recently, in a singing show, he himself revealed that Ajith acted in a Telugu film first and he was one who introduced him to the producer of that film. The singer revealed that Ajith and his son Charan are classmates. “They used to write their matric exams in Andhra together. When Ajith went to ad shoots, he used to wear Charan’s shoes and clothes because of sentimental reasons” he said at that time.

Previous articleFollower Tried Troll Singer Pragathi By Mentioning Ashok Selvan !! She Replied
Next article“I Asked Vijay To Sing This Song Of SPB For Me” -Vanitha Pays Tribute To SPB

Bigg Boss ultimate, an OTT version of the celebrity game show is going to get streamed from the end of this month and the...

Actor Shanthanu, son of veteran director, actor Bhagyaraj, has participated in an interaction with VJ Abhishek for a show called as "Spotlight" which streamed...

Cricket lovers are witness to so many hilarious and WTF moments that happened during the game. It’s not a secret that Cricket is highly...