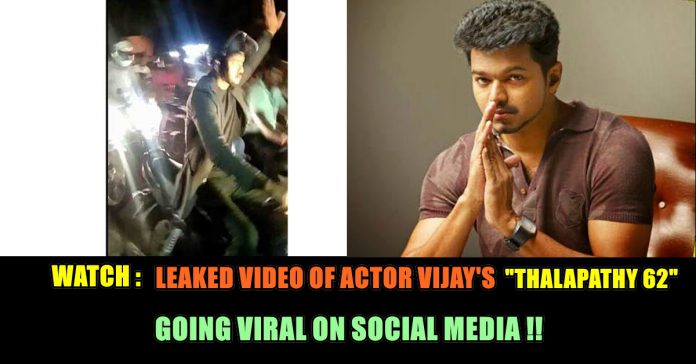 Actor Vijay’s upcoming film directed by AR Murugadoss resumed shooting after the Kollywood shutdown since March 16th came to an end recently. The crew has been shooting some important scenes late in the night in the city. A video from the shooting spot of Thalapathy 62 has been circulating on social media, and the video is getting viral. The video features Vijay wearing a leather jacket and riding a bike with a lot of other youngsters following him on their bikes, and it looks like a bike rally. This scene is said to be shot near Pachaiyappas College, in Chennai. It is being reported that this bike sequence is one of the most important scenes of the movie. [wp_ad_camp_1]
Touted to be a social drama, ‘Thalapathy 62’ is being produced on a lavish budget by Sun Pictures. Keerthy Suresh has been paired opposite Vijay with music director A.R. Rahman composing the music. The film is also written by the famous writer B Jeyamohan along with AR Murugadoss. Interestingly, actor Livingston plays Keerthy Suresh’s father in the film, while actors Radha Ravi, Pala Karuppiah and Yogi Babu will play supporting roles.
Meanwhile, the yet-to-be titled film called as Thalapathy 62, is slated to hit the screens for Diwali this year. This is third film by Vijay and AR Murugaodss after their successful Thuppakki and Kaththi. Previous articleWatch : Traffic Police Hits Two Boys With His “Chappal” For Not Wearing Helmet !! , WTF !!
Next article7 Ultimate Questions That Raises Right After Coming Out From AVENGERS : INFINITY WAR!!

Suriya Tweeted After Watching “Sarpatta” !! Got Trolled For Missing The Film

Kollywood's top-tier actor Suriya who was supposed to play lead in the recently released blockbuster film "Sarpatta Parambarai", watched the film and uploaded a...

After the sixth over of first one day International match between Australia and India, two protesters barged into the Sydney cricket ground holding a...

With "Viruman" releasing on 12th of August across the theatres in Tamil nadu, a report about Aditi Shankar who is going to make her...