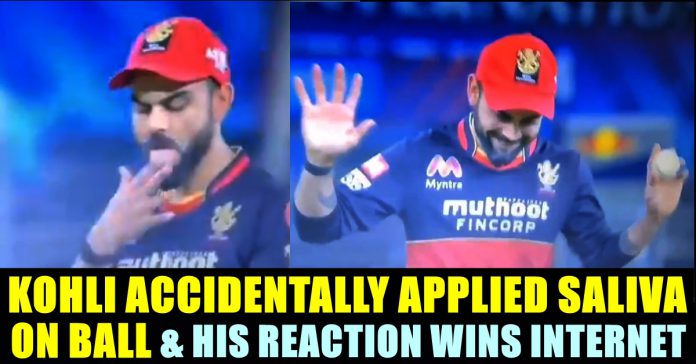 Captain Kohli’s Royal Challengers Bangalore won the toss and chose to bowl in their fifth league against Delhi capitals. The Shreyas led team which is currently topped the table with 6 points after Mumbai Indians, is looking strong whereas Kohli led RCB is also waiting right next to them to grab the first spot by winning the game.

As we all know, the ongoing IPL tournament is being conducted with many restrictions to avoid the COVID 19 spread. Off field Players are required to undergo COVID 19 test every now and then and stay under bio bubble to keep cricket teams relatively isolated from the outside world so as to greatly minimize the risk of COVID-19 infection. On field, the players are suggested to slightly touch each other’s fists instead of giving high five and handshakes. They are also advised not to wet the ball with their saliva to make it shine for the pacers in order to swing the ball.

Using spit and/ sweat is common and, for practitioners of swing bowling, integral. The moisture gained from spit or sweat when combined with polishing, smooths out one half of the ball which in turn allows air to pass over one side of the ball more quickly than over the other. Cricketers have long used saliva or sweat to shine one side of the leathery ball to help fast bowlers generate greater swing in the air as it travels towards the batter.

However, due to this COVID 19 conditions, players are advised not to involve in such activities to avoid the spread. Now, in today’s match against Delhi capitals, RCB captain Kohli accidentally touched his tongue and tried to shine the ball like he always do. The cricketer who has been doing it since he started playing cricket in teenage, couldn’t restrain himself from doing it, it seems.

However, he quickly realized and stopped doing it. After that, he gave a wide smile and raised his hands up, in a way of gesturing that he didn’t do anything intentionally. His reaction was captured in camera as well as by the fans of him.

The short video clip is trending in Internet with reactions pouring from his fans and cricket observers.

What times! @imVkohli applies saliva on the cricket ball and immediately apologizes.

Comment your views on this gesture of the Indian captain !!

Previous articleDeleted Promo Of BIGG BOSS Season 4 Leaked !! WATCH
Next articleAshwin’s Final Warning To The Batsmen Of All The Teams !!

Director Lakshman who made the recently released "Bhoomi" of Jayam Ravi and Nidhi Agarwal, has replied to an online user who trolled him after...

Mumbai Indians successfully clinched the title for the 5th time in IPL history. The team which looked the strongest during the league stage, effortlessly...