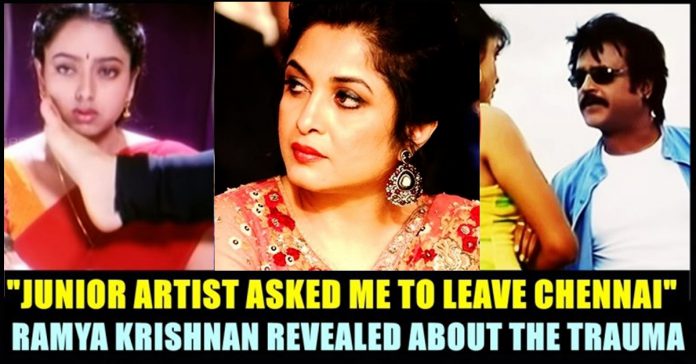 We can part Tamil cinema as before Padayappa and after Padayappa. The film rewrote the meaning of “mass” in the history of Tamil cinema and also became the first film to collect 50 crores in Tamil film industry, according to sources. The film had Ramya Krishnan as the main antagonist against Superstar.

The plot revolves around Padayappa, an engineer whose father dies of shock soon after he is defrauded and loses his property to his foster brother. Neelambari played by Ramya krishnan, initially loves Padayappa, but plans to take revenge on him and his love interest Vasundhara after his family humiliates her father. The rest of the story deals with Padayappa climbing back to financial success and arranging his daughters’ marriage while overcoming all the obstacles placed by Neelambari.

This film gained Ramya krishnan a huge fame as people started calling her by her character name in “Padayappa”. There were so many scenes in Padayappa where Neelambari would confront Padayappa and humiliate him in order to take revenge. Though it is merely a film, fans of Superstar actor Rajinikanth got emotional on seeing the scenes where Ramya krishnan confronted their favourite idol during the film’s release time. We have even heard of instances where people threw sandals on the screens of theatres to express their anger on Neelambari aka Ramya krishnan.

Now after several years, Ramyakrishnan who participated in a quiz show hosted by Radhika Sarathkumar, has shared about the trauma she went through during the release time of “Padayappa”. She revealed that a junior artist asked her to leave the state for few days to prevent herself from the fans.

“I felt very bad during the shooting for getting that character. I worried for not getting a chance to play the character played by Soundarya. On seeing every dialogue I was supposed to utter, it got onto my nerves. I wondered where they (Rajinikanth fans) are going to pelt stones. I was so scared” said Ramya Krishnan about acting along with Superstar Rajinikanth.

Further she went on to add about a conversation she had with a junior artist. “After finishing the climax shooting, there was a junior artist. She asked me to stay out of Chennai for 1 month which scared me more” said Ramya Krishnan. She even said that a sandal was thrown at her picture in Albert theatre. However, Ramya krishnan said that it all happened only during the first day of release. “After that everything changed” she said.

Directed by K. S. Ravikumar, the film “padayappa” also featured Sivaji Ganesan, Soundarya in the lead roles with Abbas, Lakshmi, Radha Ravi and Nassar in supporting roles. The soundtrack album and background score were composed by A. R. Rahman.

What do you think on this experience shared by Ramya krishnan ?? Comment your views below !!

Previous articleShanthanu Fears Of Losing The Opportunity Of Acting In “MASTER” !!
Next articleChinmayi Once Again Shared Screenshots Of Harassers !!

Bigg Boss, the most happening show among Tamil television audience, yesterday saw a rift between the contestants of the show. At the end of...

Siddharth Blocked Gayathri Raguramm In Twitter !! Check What The Actress Has To Say

Actor Siddharth who is known for appearing in films that were made across the country, has never shied away from expressing his disagreement on...