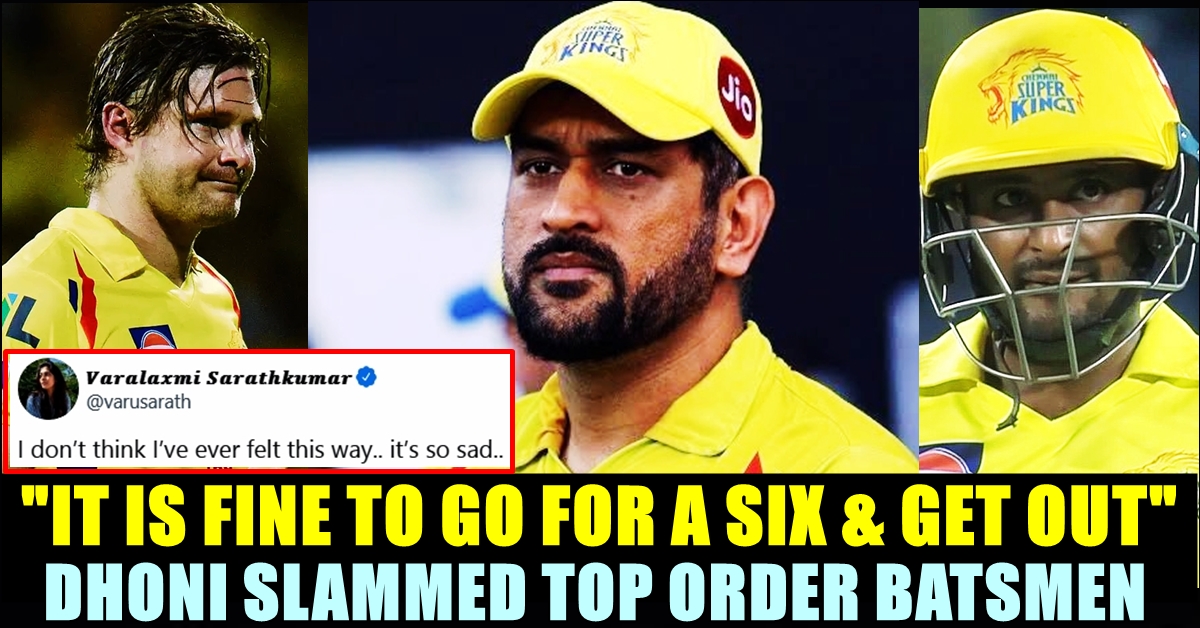 Chennai Super Kings registered their fifth loss in the ongoing IPL tournament after failing to chase 170 runs posted by Royal challengers Bangalore in their first innings. They who initially failed to control the runs in the final few overs of RCB’s first innings, totally collapsed while came in to bat. They were never in the chase to be precise. Reports suggests that the batsmen of the yellow team played 40 plus dot balls while chasing which let the team down.

On seeing the loss, fans including Tamil cinema celebrities got extremely dejected. Being a successful team in the league stages of IPL, the chances of Chennai Super Kings reaching playoffs looks blur as they still couldn’t discover a right combination even after playing half way through the tournament.

MS Dhoni felt that the team is doing the same error. “Maybe the individuals are different but it’s almost the same thing happening.” said Dhoni. He said that it is fine to get out while trying to play the bigger shots rather than putting pressure in the middle order. the former Indian captain said that an individual have to go out and have their own game plans, not matter how much confidence they are getting from others.

“There are too many holes in the ship. When you keep plugging one and the other, the water is flowing from the other side. I think we have to get out act together. Everything needs to work in the same game. I think once we get results in our favour, things will be slightly different for us.” the wicket keeper said.

The CSK captain who looked a bit satisfied with the bowling department, said that the main worry still remains the batting department. He said that the batsmen of CSK are not being consistent. “In the coming days, we will try to be more expressive on the field rather than getting out on the 17th or 18th over, rather than having wickets at the end but at the end of the over you don’t really have enough on the board” the 39 year old said.

Along with fans, many Tamil cinema celebrities, politicians and cricket experts including former CSK players expressed their emotions over the team’s loss. Check out some of their reactions below :

CSK need to get some urgency and combinations going in their batting. Faf an Watson been good. Maybe give Bravo more balls. Running between the wickets lethargic.

#csk keeping too much for too late in those big grounds at the #UAE As for #RCB the team is looking complete with #morris coming in,Fantastic win for them #ViratKohli #Devduttpadikkal #WashingtonSundar

I didn't think I would ever say this about a team I have so admired but where do @ChennaiIPL go from here? Waiting for a revival.

You know its bad when CSK makes RCB look good; actually the best they've ever been… #rejig #retire #return

I don’t think I’ve ever felt this way.. it’s so sad.. but I still have faith in our team..after all they have bled for us.. sweat and worked hard..just bcos one season they are struggling doesn’t make them a bad team..!!! I still love u #CSK let’s keep the faith.!! @ChennaiIPL

Much needed change is the winning attitude #csk

I know it’s heartbreaking 💔. We are not used to this. #CSK has never put us in this kinda situation ever before. We should be thankful for that. There are teams that haven’t made the playoffs in several years. Yaanaikum adi sarakkum. Let’s not trash talk. #CSK for life ❤️👑 #MSD