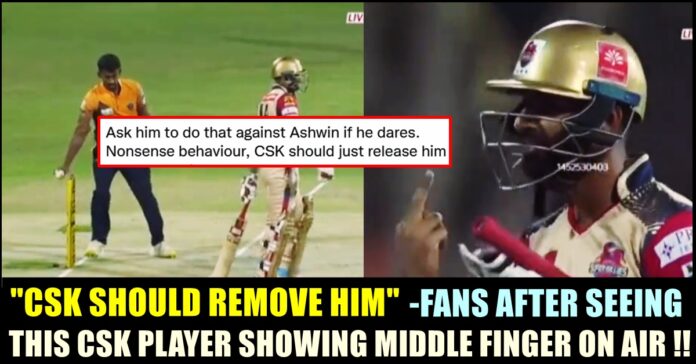 A video of CSK’s Jagadeesan who is currently playin in the TNPL showing middle finger to his senior player Baba Aparajith is trending social media platforms with fans expressing their displeasure over the cricketer’s gesture. Jagadeesan lost his cool after getting out through “Mankad” method. The cricketer deliberately displayed the obscene gesture several times, especially in a way of registering it in the camera.

During the opening game between the Chepauk Super Gillies and Nellai Royal Kings in the Tamil nadu Premier league which took place in Thirunelveli on Thursday. Jagadeesan of CSK fame opened the innings for CG along with skipper Kaushik Gandhi while the team was chasing a mammoth score of 185.

Baba Aparajith who was bowling, dislodged the bails before bowling the delivery as he seen Jagadeesan who was in the non-strikers end, getting out of his crease. Without waiting for the replays, Jagadeesan immediately left the field, fuming at the way he was dismissed. Before returning to the pavilion, the batter turned around twice and showed his middle finger, once with his gloves on and other time with bare hands. 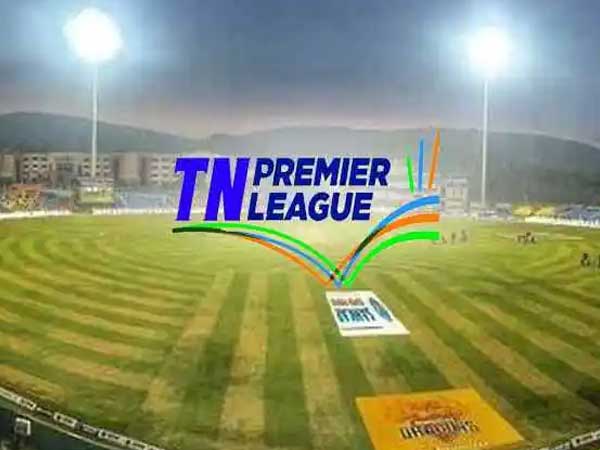 While getting out Jagadeesan was on 25 off 15 with four boundaries. The team was at 53 in 3.4 overs when he got out through “mankad” method. Here’s the video that is going viral in social media platforms :

Gesture of the emerging player didn’t impress fans who called him out for his disrespectful attitude. “Stay in your crease and this won’t happen. Wonder if he would have acted this way if this was ipl” a follower said on seeing Jagadeesan’s behaviour whereas another one said “Ask him to do that against Ashwin if he dares. Nonsense behaviour, CSK should just release him for next season!”

Stay in your crease and this won’t happen. Wonder if he would have acted this way if this was ipl.

Ask him to do that against Ashwin if he dares. Nonsense behaviour, CSK should just release him for next season!

Two things will define you !

First thing which popped up in my mind reading the comments is quote by MK – “If i had to runout non striker 11 times i would do it” in the beautiful convo between @kartikmurali and @ashwinravi99
Happy that there was no delay for the decision, hopefully this becomes normal https://t.co/SlP9wKp3Kp

Middle finger for what? Playing according to the rules https://t.co/R2IqXrLMOD

Too bad from Jaggi!

Well done @aparajithbaba you did nothing beyond rules

Previous articleSivaangi’s Reply To A Follower Who Talked About The Struggles Of A Middle Class Goes Viral !!
Next articleOTTO Stores Reacted To The “Varisu” Poster Troll !!

Debate Between Seenu Ramasamy & Follower Over A Father Getting “No Caste” Certificate For His Daughter!!

Couple of days ago, news about a man from Coimbatore getting "No Caste, No Religion" certificate for his daughter made headlines. Naresh Karthick who...