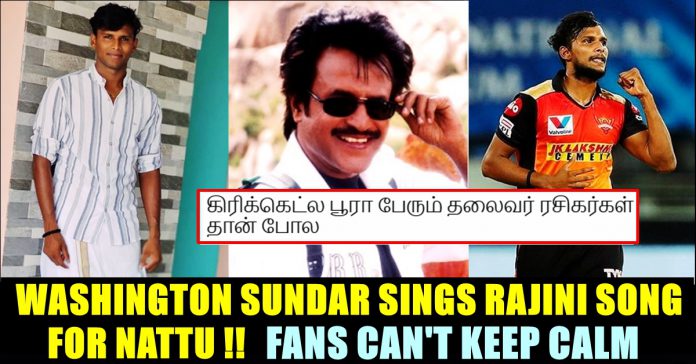 Though Chennai Super kings failed to qualify for the play offs, cricket fans of Tamil nadu have many moments to cherish from the league stages of IPL 2020. From Varun Chakravarty and Dinesh Karthik communicating with each other in Tamil to Natarajan bowling the highest number of yorker deliveries in the tournament, Tamil nadu cricket fans enjoyed the tournament to the fullest.

Kolkata Knight riders did well till Dinesh Karthik captained it whereas Sunrisers Hyderabad’s Natarajan got selected in Team India’s T20 squad by bowling more number of yorkers than Bumrah in the tournament. Murugan Ashwin did his job for Kings 11 Punjab and Delhi capitals made a good use of Ravichandran Ashwin’s bowling.

Varun Chakravarty made his face recognised among the selectors and audience as well. Washington Sundar of Royal Challengers Bangalore also grabbed the top spot as far as the bowling economy of an individual bowler in the tournament is concerned.

Now, in a way of celebrating Natarajan’s selection in the Indian team, Washington Sundar dedicated a song to the latter. In a selfie video, he sung “Vettri Kodikattu” song of Rajinikanth’s Padayappa and made Nattu blush. In a way of mentioning the free cricket academy Nattu is managing in his village, Sundar sung the lines “Yaarukkum Theenginri Vazhbavan Manithan, Oorukke Vaazhnthu uyarnthavan Manithan, Nettru Varaikum Nee manithanappa, Indru Muthal Nee Punithanappaa” (A true human being is someone who doesn’t cause harm to others. A superior human is someone who lives for his people. You were a human till yesterday, now you became a superior) from the song.

“There is no substitute for Hard work.” his caption read. Check out the video posted by Washington below :

There is no subsitute for Hardwork.🔝 @Natarajan_91 🇮🇳 pic.twitter.com/nDAMfLu6AM

Earlier, Natarajan was announced as a part of the touring contingent but was not named in the main squads. He was previously named only among the reserve group of net bowlers. However, he who is considered as a major find of this IPL season, replaced Varun Chakravarthy who got ruled out due to shoulder injury. Nattu made a big impact in the tournament by taking 16 wickets with 63 yorkers which is highest by any. His accurate yorkers in the death bowling impressed selectors big time it seems.

Natarajan is running a free academy in his village Chinnappampatti of Salem. He doesn’t charge the 50-60 students who are learning the sport there. The academy is well received among the Tamil nadu players and is expected to get a wide reach from this year as he looks promising in his career.

A post shared by Natarajan Jayaprakash (@natarajan_jayaprakash) on Mar 6, 2017 at 8:13pm PST

Desingh Periyasamy, director of recent blockbuster “Kannum Kannum Kollayadithal” who is also an ardent fan of Superstar Rajinikanth reacted to the video posted by Sundar. Check out his and some of the other reactions for the post uploaded by Washi :

must deserved,all the best to natrajan for getting selected in indian t20 squad

wohoo! washi and nattu! can't wait to see u guys in action!