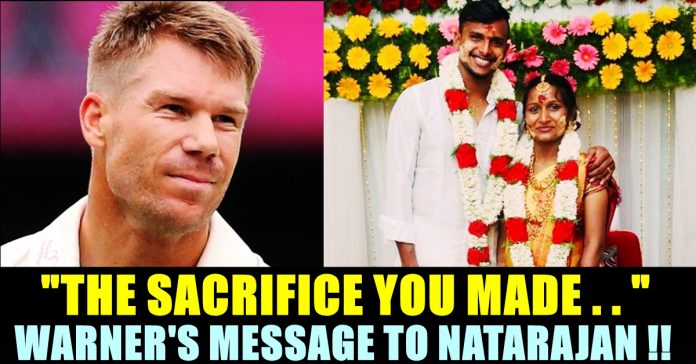 Players of team India who took part in the historic Brisbane win are extremely delighted and are uploading posts in their respective social media accounts to express their happiness. Washingtom Sundar, Natarajan, Rishab Pant, Shubman Gill, Mohammad Siraj, Shardul Thakur, Navdeen Saini are some of the youngsters in the winning team who showed grit and character to clinch the trophy in the Australian soil. Pujara, Rahane, Rohit Sharma’s experience also helped the team big time throughout the series.

“When the chips are down. You push harder.💪💪 A series we can never forget. 😍 Through the tough times we always believed and backed ourselves and this series win proves with belief you can achieve everything.💯🙏” wrote Pant who scored the winning runs for the team.

After paving way for India’s victory by taking five wickets in the second innings, Siraj uploaded a picture of himself with the trophy.

“We came. We believed. We conquered. #TeamIndia” said Sundar through his Instagram who took crucial wickets and played two outstanding knocks in the final test.

Thangarasu Natarajan who took part in the final test due to the absence of some of the senior players, wrote “The last couple of months have been surreal. My time with #TeamIndia has been the best of my life. Playing Test cricket for India was a dream. We have overcome many hurdles on this tour to win this series. Overwhelmed with your support.🙏🇮🇳 #teamindia” in his official Instagram account.

Natarajan became the first Indian player to make debut in all the three formats in a singe tour and took three crucial wickets in the first innings. He also excelled in the other two formats. The 29 year old from Salem, made his place into the international side after proving himself in the IPL tournament.

Nattu’s IPL team captain David Warner who represented the losing team, uploaded a comment in the post of Natarajan. The cricketer who enjoys a huge fan base in South India for his social media posts and for his on field performance, in his comment, appreciated Nattu for sacrificing the most memorable moment of his life. Natarajan decided to stay with the team when his first child born in Tamil nadu.

“Well done legend, very happy and proud for you! Your last few months playing for @sunrisershyd then the sacrifices of missing the birth of your first child, then making debut everywhere was amazing to see. Good man you are” Warner’s reply comment said.

This comment from Warner won the hearts of Indian fans as he took time to laud an Indian talent amidst the mental trauma he was going through due to the defeat his team faced. After losing the match, Warner came up with a post giving credits to India for the deserving win.

Mukesh Ambani's Reliance Retail Ventures which is a subsidiary of Reliance Industries has bought Shri Kannan Departmental store for a whopping amount of Rs.152...